In college, I made a list of books I wanted to read. This is the first page: 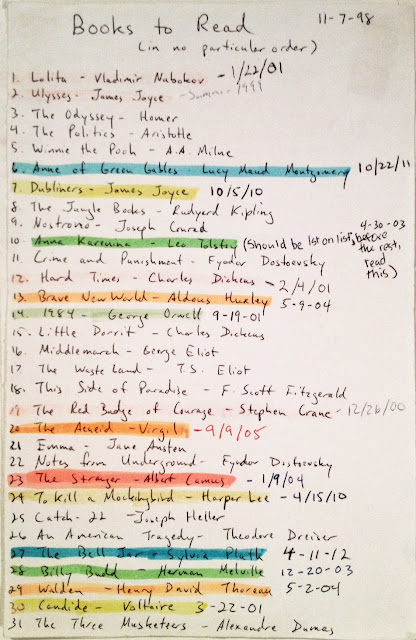 There are nine more such pages, full of titles selected based on some combination of the following reasons:

From the first, I consciously specified that these works were listed “in no particular order”; I wrote them down as I thought of them, with the natural consequence that most of the heavy hitters are loaded onto the first few pages.

However, looking back on just page one of the list, I feel myself raising an eyebrow at the person I was back in 1998.

Whatever their merits, I no longer feel any urgency to read such works as An American Tragedy or Nostromo (the former, at least, inspired the excellent film, A Place in the Sun – can I substitute watching that for reading the book?). I tried to read Catch-22 and found that its brand of insistently ironic humor was lost on me, and I am unlikely to revisit it. I’m rather bemused that The Jungle Books and Winnie the Pooh found their way on here (can the Disney adaptations really suffer by comparison?). And fourteen years later, my inability to get through Homer’s Odyssey continues to be the secret shame of my literary life.

Other works, of course, have become the cornerstones of my intellectual existence – Walden, Lolita, Ulysses, Brave New World, 1984.

Anna Karenina (despite the hyperbolic recommendation a friend of mine scrawled on the list) bored me; it was like reading only the “Peace” half of War and Peace. If I wanted purely domestic drama, I’d read Jane Austen. But nevertheless, I’m glad I read it.

As indicated by the completion dates next to highlighted titles (and though I’ve demolished half of the books on this page, later pages are almost pristine), I’ve been deplorably leisurely about tearing through the list.

Once written down, the books constituted a sort of trophy hunt, and I cannot deny the thrill of scratching a book off the list with a glowing highlighter. And though I am reluctant to view great works of literature as merely challenges to be defeated, part of the raison d’être of such a list is to give oneself a concrete reminder: this is the work you have left to do, or more pointedly, don’t die before you finish these!

And so, one of my goals for the new year is to read at least a book a week. I don’t require that the book be on my current list. I actually stopped adding to the list in 2002, when I realized I wasn’t reading fast enough to justify adding more titles. But I have little doubt that most of this list is still worth reading, and if I can bag 50 titles this year, I’ll consider adding more contenders.

In the meantime, as I make progress, I’ll probably post some reading notes, which will be invaluable for helping me accomplish another goal for the new year: writing at least one blog post a week.
Posted by Czardoz at 11:21 PM