You know the guy. Everyone knows who the fat president is, right? 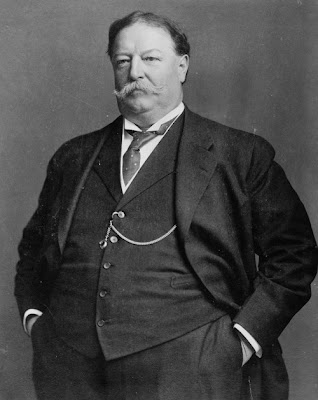 There he is, the 27th President of the United States of America. Quite the looker. According to various sources, Taft weighed “as much as 300 pounds” or even up to “350 pounds” during his time as the sitting president. Though at that weight, one can hardly imagine him standing!

If you remember anything about him besides his corpulence, it’s that he was the guy who had a custom extra-large bathtub installed in the White House. If you recently completed a year of high school U.S. History, maybe you know that he was Teddy Roosevelt’s hand-picked successor, and that his failure to follow Roosevelt’s policies led to the latter’s formation of the Progressive “Bull Moose” Party to try to retake the presidency. Otherwise, what was Taft to you, or to history? He was merely the fat president.

A sort of glory happened in 2008 when the United States elected Barack Obama to be president, a repudiation of the cynicism that said a black man could never be elected president by the American people. But as his presidency ossifies into immutable form, I fear that Obama will become another William Howard Taft – known for one prominent trait, but ultimately an insubstantial one. Will Obama be remembered as “the black president”?

Rather than seeing the Sandy Hook school shooting as a call for high-minded action, I expect that Obama will see it as yet another chance to stand with dignity above the fray, content to be The Great Sympathizer, the guy who says the right things, that we need to circle the wagons around dead kids, not dishonor them by arguing about guns. And that’s fine. He should be a nice guy, as usual. History tends to remember nice guys, right?

Generally speaking, Americans do not want their presidents to emulate Napoleon or Alexander the Great. Or do they? It seems like history remembers presidents who stuck their noses into the big problems of the day, Abraham Lincoln, for example, or Franklin Roosevelt. Is our gun culture really a bigger problem to tackle than slavery or civil war, economic collapse or a world war?

Rather than kowtowing to Americans’ supposed reverence for our “strong tradition of gun ownership,” wouldn’t it be worthier to be remembered as the president who stood up to the gun nuts and took away our freedom to turn kids into hamburger? Better yet, be remembered as the president who forcefully pried us away from our addiction to climate changing ways. There are probably a couple of other big issues that would qualify. Oh, that whole slavery thing? That hasn’t gone away entirely, has it? Equal rights for gays, those quaint second-class citizens? Perhaps the gays are doing just fine pushing forth their own agenda. They don’t need the president’s charity!

Everyone already acknowledges that presidents are highly concerned with their legacies. So wouldn’t it be a good idea for Obama to get a bit audacious with his leadership and his speeches, if only for the sake of his legacy? I for one am rather frustrated with his campaign slogan: “Change, but not too much. Forward, but not too fast.”

With reelection safely behind him, surely Obama can afford to be himself? Isn’t that what people loved about George W. Bush, that he was always himself? (Maybe he wasn’t smart enough to be anyone else, but that’s beside the point.)

Even when we all loathed Bush for going bananas after 9/11 and plunging America into two foreign wars, we couldn’t deny that this was Bush being Bush. And no matter what we might want to believe about the master of overreacting, Bush did not destroy America. Regular old Americans did that when we put our rights and future into the hands of the wealthy, the lobbyists, the selfish few.

My worry is that this passivity and guardedness is Obama being himself. That this is all there is to him.

Obama is fond of some words attributed to Martin Luther King, Jr., who himself was actually quoting the 19th century reformer and abolitionist, Theodore Parker: “The arc of the moral universe is long, but it bends toward justice.” I can go along with that; progress takes time. Hopefully, Obama can go along with being remembered only as “the black president.”

Throw some bells and a red suit on him, and William Howard Taft would have made a pretty convincing Santa Claus. President Obama, what do you bring to the table?
Posted by Czardoz at 4:20 PM

And we can see what a blow it was to all fats that Taft was so mediocre, as history regards him still as the "fat president experiment," rather than as the trailblazing "first fat president."

I was a senior in high school at the time of the 2000 election. Amid the frenzy leading up to it, my ceramics teacher, Mr. Brown, was the most publicly political of my instructors and would regularly try to smear George W. Bush in class. In one such instance, he relayed the news that Bush had been revealed to have scored "only" in the 1200s on his SATs. Al Gore had scored over a hundred points higher. Mr. Brown used this trivia to try to make the case that Bush was a dumdum and thoroughly unqualified to be president.

I found Mr. Brown to be an offensive character in general, but this argument was especially insensitive. We were high school students, after all; many were, at that very time, stressing out over their own SAT scores. And this was freaking ceramics class, for goodness' sake! 1200 was, at worst, average among students in advanced classes, and probably higher than most of the kids in Mr. Brown's class would have gotten. Maybe Mr. Brown had scored a perfect 1600 (or whatever-the-hell scale they used when he was a student some fifty years prior). I didn't know and didn't care; this was a stupid argument.

"Well," he said, "I just happen to think our president should be someone smart."

I wanted to punch him right then and there.