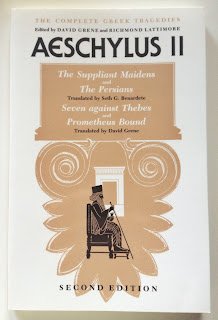 Prometheus:
As soon as he ascended to the throne
that was his father’s, straightway he assigned
to the several Gods their several privileges
and portioned out the power, but to the unhappy
breed of mankind he gave no heed, intending
to blot the race out and create a new.
Against these plans none stood save I: I dared.
I rescued men from shattering destruction
that would have carried them to Hades’ house;
and therefore I am tortured on this rock,
a bitterness to suffer, and a pain
to pitiful eyes. I gave to mortal man
a precedence over myself in pity: I
can win no pity: pitiless is he
that thus chastises me, a spectacle
bringing dishonor on the name of Zeus.

Chorus:
Of iron mind he must be, must be made of stone
who does not sympathize, Prometheus, with your sufferings.
Myself, I would not have chosen to look on them;
now that I do, my heart is full of pain.

Prometheus:
Yes, to my friends the sight is pitiable.

Chorus:
Did you perhaps go further than you have told us?

Chorus:
What cure did you discover for that sickness?

Prometheus:
I sowed in them blind hopes.

Chorus:
That was a great help that you gave to men.

Prometheus:
Besides, I myself gave them fire.

Chorus:
Do now creatures of a day own bright-faced fire?

Prometheus:
Yes and from it they shall learn many crafts.

I decided to give Aeschylus an encore, as I had always been interested in the myth of Prometheus, the fire-bringer, the light-bearer, and Prometheus Bound was on my list. Prometheus Bound is the sole survivor of a Prometheus trilogy that is assumed to have existed, and is generally attributed to Aeschylus. It consists primarily of a series of speeches by the chained title protagonist and the visitors to his lonely rock. Though this prevents any true “action” from occurring in the play, it does not limit the dramatic tension.

The traditional telling of the myth has Prometheus lashed to a storm-blasted rock, punished by Zeus for stealing fire from the smith-god, Hephaestus, and giving it to man. Here, a giant eagle comes every night and eats his liver in most gruesome fashion, only to have it grow back the next day to be eaten again:

Hermes:
Then Zeus’s winged hound, the eagle red,
shall tear great shreds of flesh from you, a feaster
coming unbidden, every day: your liver
bloodied to blackness will be his repast.
(Lines 1022-1025)

Other aspects of the myth include the notion that Prometheus originally created man from clay, and that the punishment for the gift of fire also included the creation of the first woman, Pandora, who is sent by the Olympian gods to sow discord and evil gifts among men. These latter ideas do not figure into Prometheus Bound.

In some ways, I enjoyed this play more than any of the Oresteia plays. Some of this may be due to the lucid and stately translation by David Grene, who renders a Prometheus who is both weary and defiant, an almost modern portrayal – like something you’d see in a movie – of the wily veteran undergoing torture, laughing through his tears. The Titan does not so much argue in his own defense (this play has not the litigious quality of The Eumenides), but rather rails against the injustice of a Zeus who wields unchecked power, and moreover, who forgets those who have shown him loyalty (for Aeschylus’s Prometheus had sided with Zeus against his fellow Titans):

Prometheus:
Now look and see
the sight, this friend of Zeus, that helped set up
his tyranny, and see what agonies
twist me, by his instructions!
(Lines 307-309)

The chief appeal of Prometheus Bound lies in the weighty drama of a god tormented and punished because of his love for humanity. Prometheus is a Titan, and thus a god more ancient than Zeus and the Olympians, but he has little power in the face of Zeus’s overwhelming force. Power enough, though, to save humankind from obliteration by the supreme god’s lightning bolts. Why Zeus wished to destroy the human race, and how exactly Prometheus stopped this, are not clear in this play. What is clear is that his gifts to humanity are extensive, and the enlightenment they represent is perhaps the greatest threat the new gods have to fear.

Beyond the gift of fire mentioned above, Prometheus goes on to describe a litany of gifts he has brought to human society: the knowledge of construction, written language, sailing, agriculture, medicine, prophecy, religion:

Prometheus:
In one short sentence understand it all:
every art of mankind comes from Prometheus.
(Lines 504-505)

And for this, his recompense is an eternity of miseries:

Prometheus:
I knew when I transgressed nor will deny it.
In helping man I brought my troubles on me;
but yet I did not think that with such tortures
I should be wasted on these airy cliffs,
this lonely mountain top, with no one near.
(Lines 268-272)

The analogies to the story of Christ, though imperfect, are enjoyable and unmistakable. A great figure, part-god and (symbolically) part-man, and the savior of mankind, is affixed to a towering height, tormented by the powers that be, his only crime – his love for humanity.

Two thousand years later, the stories still exist – both the myths of Greece and the words of Scripture – but their status in our culture is markedly different. Why do the Olympians exist primarily as fodder for academic study and fanciful books and movies, while the legacy of the Hebrews endures as the preferred mysticism and superstition of human beings?

Of the various options available to the western world, was there something more true about the Abrahamic religions? Perhaps in the sense that benevolence and love, the hallmarks of Christ and Islam’s Allah, are more attractive in the long run than caprice and willfulness, as embodied in the Greek and Roman gods. By this measure, it’s no surprise that the former survive as doctrine, while the latter are the stuff of fairy tales.

Presumably, such echoes were not available to Aeschylus or his original audiences, nor were the impact that Prometheus Bound and its source myth made on Milton and, later, the Romantic poets of 18th and 19th century Britain. And when the spirit of Prometheus was conjured as a guiding light of the revolutionary era of the late 18th century, well of course that’s also a universe apart from the small local world that the ancient Greeks understood.

But surely, attendees of the Great Dionysia watched Prometheus Bound and heard in its words a rebuke of tyrants, of men like Pisistratus, who only a generation or two ago had seized power over Athens, and his sons Hippias and Hipparchus, whose overthrow had led to the beginnings of Athenian democracy.

Though the other plays in the trilogy are lost to us, and lost is whatever evolving view Aeschylus had of the relationship and potential reconciliation between Zeus and Prometheus, taken on its own terms, Prometheus Bound is clear – Zeus is a tyrant, and his actions are inexcusable. Prometheus berates Zeus’s messenger, Hermes:

Prometheus:
Your speech is pompous sounding, full of pride,
as fits the lackey of the Gods. You are young
and young your rule and you think that the tower
in which you live is free from sorrow: from it
have I not seen two tyrants thrown? the third,
who is now king, I shall yet live to see him
fall, of all three most suddenly, most dishonored.
Do you think I will crouch before your Gods,
– so new – and tremble? I am far from that.
(Lines 954-961)

Though the Greek word, tyrannos, does not have the negative implications of our word, tyrant, given the pains the Athenians had taken to remove their tyrants and replace them with a democratic system, as well as the reverence bestowed on the tyrannicides, Harmodius and Aristogeiton, it seems justified to think that most Athenians would not have welcomed any attempt to revert to despotic rule.

Prometheus is a powerless captive, but he is on the side of the right, and that is enough to sustain him until the day of his deliverance (he has foreseen his own rescue by Heracles some thirteen generations hence). His words also contain the one threat that Zeus fears; his gift of prophecy holds the secret to Zeus’s downfall. Prometheus alone knows that an ill-fated amorous conquest will lead to “a son greater than his father.” Implicit is the sense that tyranny, by nature, is fleeting, and leads to its own demise:

Prometheus:
Worship him, pray; flatter whatever king
is king today; but I care less than nothing
for Zeus. Let him do what he likes,
let him be king for his short time: he shall not
be king for long.
(Lines 937-941)

The myth goes (not mentioned in the play) that the sea nymph, Thetis, is destined to bear a child who will be greater than the father. Eventually, Zeus will learn this and dodge the bullet by not coupling with her, and instead marrying her off to the mortal king, Peleus. The child of Thetis and Peleus is, of course, Achilles, greater than his father by far, but no threat to Zeus.

What we have inherited from antiquity is but a fraction of the plays written by Aeschylus, Sophocles, and Euripides, and this is perhaps a source of endless anguish for classicists, philologists, and lovers of literature the world over. Aeschylus is thought to have written at least seventy plays, and among the lost are the two plays that would have completed our picture of his Prometheus (though the authorship of Prometheus Bound is debated).

Looking just at the play we have, however, we may set aside issues of what Aeschylus was trying to say, which may forever elude us, and focus more on what we actually hear.

In this incomplete story of a defiant old god and a merciless new god, I take away a message that if there is to come a time when Zeus is king no longer, his undoing will be humanity, educated and nurtured by Prometheus and the arts of civilization. It is reason that turns humanity away from religious superstition, as well as its inherent despotism of ignorance and dogmatic force. We are indebted to myths, but we are not enslaved by them. We rightly celebrate not the fantasies of Olympus or Golgotha, but rather the symbols.

For we are indeed “creatures of a day,” and if there is any future, any immortality, for us, it is only because we pass on our scraps of reason and knowledge to those that follow us. The ideals of the American Revolution and the French Revolution were not accomplished with the setting down of the Declaration of Independence or the storming of the Bastille, respectively. They continue to be accomplished, and humanity continues to crawl toward enlightenment, one candle at a time.
Posted by Czardoz at 8:00 PM