For those of you who were looking for a reason to spring for that Disneyland 2fer ticket, behold: 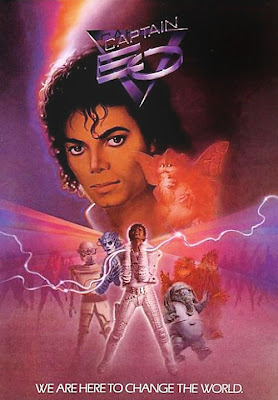 After a 13-year absence, Captain EO returned to Disneyland yesterday, February 23, for what is described as a “limited engagement,” though some sources report that the stay will be indefinite. Good riddance to Honey, I Shrunk the Audience, which this replaces.

I saw Captain EO more than once when I was a kid, and I remember not one jot of detail from it. But when news of Michael Jackson’s death broke back in June, one of the first stray thoughts that moonwalked into my mind was, “I wonder if they’ll bring back Captain EO at last.” What? You didn’t wonder the same thing?
Posted by Czardoz at 4:40 PM

I do remember one thing about Eo: during one scene, a 3-D space insect jumps out at the audience. It scared the bejeezus out of me when I was little {if there was any bejeezus there to begin with.} I'm glad they're bringing it back, and I hope it gives Avatar a run for its money. Suck it, Cameron, Jacko's back!

I remember Mom and Dad would always tell me to catch the fireball that shot out of the screen. I always made sure to sit near the center of the theater so that I would be in good position to do so. Then, one time, I made the mistake of noticing another kid, several seats over, making the same catching motion, he and his parents reacting with the same pride and joy. I had been a fool, but I was no idiot. That was the day I learned to stop believing in things.