It’s sad that figure skating is a sport where the controversy is more interesting than the sport. 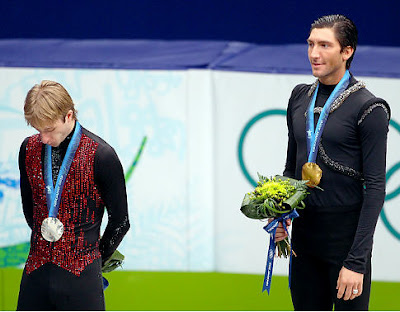 I shed no tears for Evgeni Plushenko or his countrymen, who think he was robbed of a gold by Evan Lysacek. Plushenko’s whole appearance here was predicated on the idea that he could just waltz into the Olympic Games and de-pants the field with his quad jump, and if anyone didn’t want to put his Russian cream and sugar in their coffee, then they were idiots. That self-important attitude doesn’t fly with me. The fact is, Plushenko knew what the rules were before he came, and he lost because the rules didn’t favor (flavor!) what he was cooking. 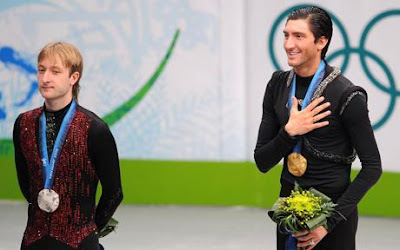 I understand that without this particular scenario of him losing this way in this place before this world audience (to an American, no less), there would have been no reasonable platform for Plushenko to criticize the advancement, or lack thereof, of his sport. If he had held a press conference before the Olympic Games to say, “Without the quad, you can’t be considered the true Olympic champion,” it probably would have elicited a collective (?) over the heads of viewers. Nevertheless, if he had won, do you think we would have heard such a well-articulated philosophy of the future of men’s figure skating? I don’t think so, and to rip his sport and his rival after losing the competition is a pretty shabby thing to do. 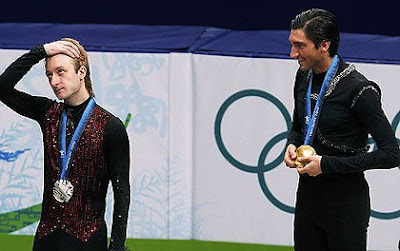 I wasn’t fond of Lysacek’s “rebuttal” interview with Bob Costas on NBC, either, but that has more to do with that network and its stable of preening commentators than it does with Lysacek. When I first saw the interview on TV, I thought it was a passive-aggressive slap in Plushenko’s face, all of Lysacek’s talk about how Plushenko had come back after a three-year absence to miraculously win a silver, as if to say the old dog still remembers a few tricks, so maybe we don’t have to put him down just yet. Watching the interview again online, it didn’t seem so bad. Costas tries his best to bait Lysacek into saying something clearly derogatory, but the youngster is apparently well-coached in the peculiarly bland vocabulary of big-time athletes.

But then came the second televised interview. Why on earth did we need to see Dick Bottoms and Scott “Bald Eagle” Hamilton plop themselves into a couple of easy chairs to tell us how wonderful Lysacek’s “package” was, and how ridiculous it was to even question his victory? Really? I can’t even suggest that a judged sport can produce questionable results without it sounding like sour grapes? Even after years of criticism of its jingoistic coverage, NBC still panders to the most xenophobic tendencies of its viewers.

Plushenko’s right about one thing: the skating federation needs to decide if this is a sport or a show. The sport is based on looking good while performing difficult figures. Fair enough. But it’s already subjective enough by that definition, and when the judges and the federation can’t even convincingly decide whether it’s more important to look good or to perform ever more difficult figures, then the subjectivity overcomes legitimacy, especially when the scoring system is notoriously inscrutable for the typical Olympics viewer.

Forgive the delicious pun, but I don’t understand why these skaters, men and women, insist on sticking to jumps that they just can’t stick. Maybe some day, someone will come along and do six quad jumps and throw in a quint, landing all of them perfectly, and it’ll be the most thrilling and exquisite figure skating performance of all time. Until then, though, I feel like the performances would be much more enjoyable to watch if the skaters didn’t overreach their abilities. Hence, why the Stars on Ice don’t tour the country charging you $50 a seat to watch them fall on their hindquarters on failed quad jump combinations. They want to look good in a show. Maybe the sport could stand to look a little more like a sport.

Coming from a ballroom dance background, I can appreciate the distinction between a sport and a show. I would love to see ballroom added to the Olympic roster, but the line between sport and show is so blurry, even by the standard of judged sports, that I don’t think ballroom would have sufficient legitimacy when placed alongside other sports.

Given figure skating’s illustrious history, I’d hate to see it lose its marquee status because of the growing discernment of its rapacious viewers. Plushenko thinks that the quad is the future of men’s skating, but the sport’s future relies on more than just bigger, tougher figures. It relies on a viewership that understands the sport and will continue to take it seriously, if only once every four years.

Looking at some more barbs slung between these two men, I feel like I should clarify exactly what I think men's figure skating should be (because my opinion, after all, is the one that counts).

Plushenko: "I think we need to change the judging system because quad is quad. If the Olympic champion doesn't know how to jump a quad, it isn't men's figure skating, it's men's ice dancing."

Lysacek: "If it were a jumping competition, they would give you 10 seconds to run and do your best jump. But it's a four-minute, 40-second program, and it's about sustaining that level of skating and excitement from start to finish. And that's what I've been working on every day."

Lysacek is more or less right, but he's dodging the issue, isn't he? Can he or can he not do the quad? Obviously not. The Olympics challenged him to work within some arbitrary rules, and he succeeded, so congratulations. But why hide behind the rules when a rival makes a direct accusation?

Maybe it's more fun and entertaining to watch beautiful skating in competition, even if it dumbs down the competition a bit. Or maybe it's more of a gas to watch exceptional athletes wilt like daisies before figures that they just can't hack. I don't know.

But in the future, even if the rules discourage it, I think there will be skaters who can do quads, and lots of them, and with consistency and grace, and when these skaters come along and start hitting them at the Olympics, then the rest of the world will have no choice but to follow suit, rules be damned. Will things be more fun to watch? Again, I don't know. But that's sport, and sport isn't always pretty.
Posted by Czardoz at 4:53 PM

As much as I dig russkies, this guy sounds like a real piece. When good names happen to bad people...

I just really dig the fact that men's figure skating has gotten people so riled up. Why can't I manage to get folks so heated over bowling?