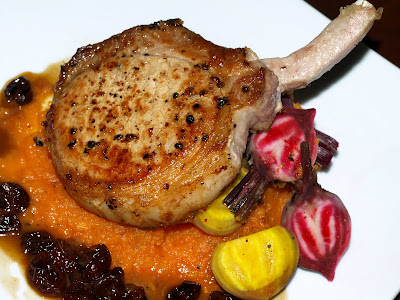 Just the other day, I was trying to remember the idiomatic expression, “get along famously,” and rather than rack my brain, I decided to give the good ol’ Internet a whack at it. I kept thinking the expression went “carry on like . . . [something],” so I typed into my Google toolbar, “carry on like.” Lo and behold, the auto fill-in feature, known as Google Suggest, so memorably featured (albeit as a supporting character) in the recent Super Bowl ad, offered this right away:

Like a pork chop? This was too good to resist, so I went with it. It turns out that this is an Australian expression that means “to behave in a silly or excited way,” or more generally, “to behave foolishly.” It’s believed to be derived from the older (also primarily Aussie) expression, “like a pork chop in a synagogue,” defined by one source as being “highly inappropriate, embarrassingly out of place, and quite unwelcome,” pork being, of course, forbidden to Jews.

Why these hammy sayings are the peculiar province of the Aussies, I have no idea. But the next time you’re in Melbourne, sipping on a Foster’s while riding a kangaroo, listening to a koala play the didgeridoo, please do look in the mirror, mate, and raise a cold one to the English language, for you are indeed carrying on like a pork chop (in a synagogue, at that).
Posted by Czardoz at 7:53 PM

That's pretty good, but I'm not sure I'll believe it until I hear it coming out of the mouth of a live Australian.

Was this post written for my benefit? That reminds me of some lines from Harold And Maude.

"Now, let's go over these pretended suicides of yours once
again. Since our last session, your mother has reported three more. As I calculate, that makes a total of fifteen. Is that correct?"

Harold looked intently at the ceiling. "Yes," he said, thoughtfully, "If you don't count the first one, and the time the bomb in the greenhouse exploded
overnight."

Dr. Harley ran his hand over his thinning hair. "Fifteen," he said. "And they were all done for your mother's benefit?"

Harold considered that for a moment. "I wouldn't say 'benefit,'" he concluded.