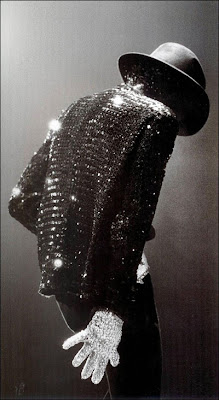 The first time I saw The Gloved One, I wanted to be him. I wanted his moves, his swagger, his single glove, and most of all, his wounded history. But this Gloved One wasn’t the Moonwalker; it was a Skywalker. Luke Skywalker’s single black glove appeared in 1983’s Return of the Jedi, covering the prosthetic hand that replaced the one Vader had cut off in The Empire Strikes Back. Lightning would strike twice in 1983, which also saw the debut of Michael Jackson’s one white glove (not to mention the first moonwalk) in his performance of “Billie Jean” at the Motown 25 anniversary special on television.

It’s not so strange to compare Star Wars and Michael Jackson. I can’t think of two more universally known properties, nor two more universally liked properties. And if the recent activities of both had caused some fans’ devotion to sour a bit, perhaps it was because they remembered so well the Star Wars and Michael Jackson of their youth, and found their current renditions so changed.

I was familiar with Return of the Jedi from an early age. My father had taped it on VHS (probably copied from a rental video) and sent it with me to my babysitter’s house, and almost every night, we would pop it into the VCR and watch it. In fact, back then, I thought this movie was Star Wars, I mean, the entirety of Star Wars. I had no idea I was missing two previous episodes. What made it worse was that my father’s tape cut off about ten minutes before the end of the movie. For years, until I was maybe 10, I thought that this movie was Star Wars, and that it ended with the Death Star blowing up and Lando and his grotesque, mush-faced co-pilot screaming in joy. Then the tape ended and started rewinding, which I assumed was what always happened at the end of a movie. I never knew there was an Ewok celebration, never saw Vader’s body burning in a funeral pyre, never knew Anakin’s spirit found peace and companionship with the ghosts of Obi-Wan and Yoda. But I got everything else, and to me, Luke was the essence of cool, not just because of the lightsaber, but because he wielded it with that one black glove, and that made him dangerous, invincible, and maybe just a little bad.

On the contrary, I had never seen Michael Jackson’s performance on Motown 25, never even knew it existed. And if not for his death, I probably never would have come across what I now consider the most amazing five minutes of entertainment I’ve ever seen:

(For the Jackson 5 medley that immediately preceded this performance, see here. This clip shows Michael’s way with the crowd as he introduces his solo number.)

This performance is made all the more incredible by the fact that it’s lip-synched, yet it loses none of its immediacy. And for being the first time he showed the moonwalk to the world, it's astounding that it's just four steps lasting all of three seconds. But when I tried to figure out what made this performance stand out among all the iconic and mesmerizing images we have of Michael, I realized it was not only because it was live and he was throwing down all his best dance moves, but because he’s out there all by himself. You can see the band lurking in the shadows, but the reality is that MJ didn’t need anyone else on stage with him, and the audience wouldn’t have noticed anyone else when he was there. His greatest sidekicks on stage were sequins, a cocky fedora, and of course, the one white glove.

If you had asked me on June 24 what I thought of Michael Jackson, I would not have recognized having any personal feelings about him. It’s a tribute to the hugeness of his imprint on our social consciousness that I didn’t even notice all the ways he would show up in my daily life. Without trying to seek him out, I kept running into him.

Last year, just casually reading some forgotten online article about an unrelated subject, I learned for the first time that Eddie Van Halen played the guitar solo on “Beat It.” Around the same time, I was delving into the post-Beatles recordings of Paul McCartney and John Lennon when I heard an unmistakable voice on Paul’s, “Say Say Say.” Maybe everyone other than me knew that Michael and Paul had collaborated, and not just that once. And that was indeed MJ singing on Rockwell’s “Somebody’s Watching Me,” which I first heard in the Adam Sandler movie, The Wedding Singer (the song is now a TV staple thanks to the Geico commercials).

When I started doing ballroom dance a few years ago, I never thought of Michael Jackson as one of my dance influences. After all, his was a completely different style from ballroom (he was practically a style in himself). Yet even in the ballroom world, there was no escaping the man.

I remember one time at a dance competition where I was entered in the hustle, an updated disco dance that is now usually set to synth-heavy contemporary dance-pop. To the delight of me and probably everyone else in the room, the music started to play, and it was “Billie Jean.” No one could have expected it. I couldn’t move at first because I was so surprised by a sound so familiar, yet strange in this context. Afterward, I thought to myself that they should play MJ at every competition.

I remember going to practice with my partner one day at our regular studio. In those days, I tended to wear white socks for no good reason except that I owned them. That day, I was dressed in black warm-ups from head to toe, with the exception of those white socks. The studio owner noticed me and asked if I were trying to channel Michael Jackson. I didn’t get the reference at first, but then I looked down to see that what looked a little ridiculous on me once looked funky and fresh on MJ.

All of these things were just neat facts and coincidences, because for years now up until his death, I never thought about Michael, maybe because he was everywhere all the time. I had ceased to notice, either for good or bad.

My first thought after hearing of his death was about Guitar Hero. Just a few days earlier, I had sung the vocal part on “Beat It,” with the guitar and bass parts in the hands of my siblings. In general, I do the vocals for this game under duress, and mostly because my siblings are reluctant and prefer the instruments. But I was ecstatic to get to this song, and I didn’t really know why. I knew I wouldn’t do it justice, and I just about mangled the “Hee” and “Hoo” yowls so badly that my brother thought I was making fun of the man, when in fact, those were part of the vocal track.

I always thought that a music artist’s success and influence shouldn’t be measured in number of albums sold. 100 million albums sold doesn’t tell you how many more millions (billions?) of people heard the songs and loved them. I never bought a Michael Jackson album or single or anything, but my first musical memory is of “Beat It.” It was my favorite song as a kid, and even though I don’t believe in favorites anymore, I don’t feel bad about saying that it’s still my favorite song. It may sound silly, but singing it in Guitar Hero has brought me closer to my memories of how much I loved Michael Jackson as a kid.

All my personal run-ins with MJ over the last few years fed into my subconscious sense of his impending comeback. Seemingly everything from the 80s and early 90s has returned to us, and the results have been a mix of successful (New Kids on the Block, Transformers, Indiana Jones, Rocky Balboa, Nintendo’s market dominance), mediocre (Teenage Mutant Ninja Turtles, Terminator, American Gladiators), and just plain ugly (Knight Rider, shutter shades, the G.I. Joe movie?). Finally, Michael Jackson announced what seemed inevitable, that he was coming back, live on stage. This was going to be his year. Even though I wouldn’t be there to see it, I wanted it to happen.

Now that the man is gone, I can only imagine what his comeback concerts in London would have done for his career and his legacy. I console myself by thinking that his death may have done exactly what he hoped the London concerts would do: bring the real Michael Jackson back into the public eye and private hearts. At least for now, it seems like all the ridicule and Michael-as-punching-bag have been wiped away, leaving only the music, which had dried up ever since his last album in 2001 and the subsequent child molestation trial that more or less banished him from the stage he once owned. More important than this, I think his death has reminded those of us who revered him back in the 80s that to us, he is still the greatest, even if we had forgotten.

On June 24, I wouldn’t have thought of Michael Jackson. On June 25, I remembered the man who first brought music into my life, and wondered how it was possible to feel so deeply about something and not even know it.

One last anecdote: I was in a Nordstrom store yesterday, browsing some shirt racks, when the mewling sounds of Coldplay overhead gave way to the opening synth of “Thriller.” I immediately started nodding my head to the beat, and then I looked up to see two other guys nodding their heads as well. We gave each other some knowing glances, but to be honest, these guys looked a little douchy, and I’d be surprised if I had much in common with them. Yet if there was one thing that could join us in a head-nodding unison, it could only be the Thriller himself. May the Force be with you, Michael Jackson.
Posted by Czardoz at 5:40 PM