I wore the mummer’s motley well, whatever that means.

There was a time when I thought I would probably never beat this game.  I started it, logged dozens of hours, got distracted by being an adult, and lived apart from it, occasionally wondering if I ever even enjoyed playing it.

I didn’t know why I eventually came back to it.  I didn’t feel like it was a choice.  Maybe it was like the island in Lost, some awful place that compelled me to come back.  Maybe it was that knot in my psyche that had to be undone before I could move on with my life.

Maybe this was my Vietnam. 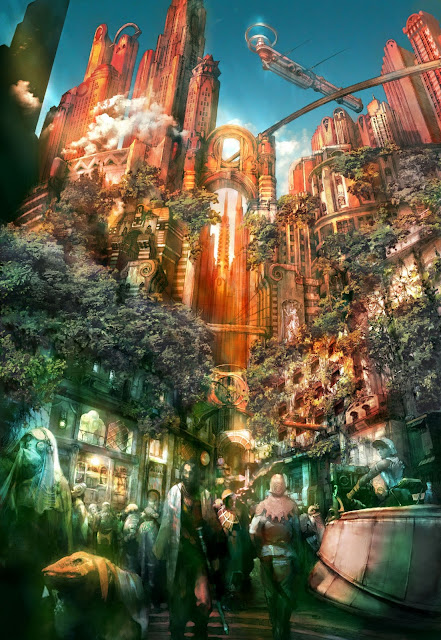 My brother asked me if I felt a sense of accomplishment after beating this game.  “Accomplishment” is not the word I would use.  That would imply that I had done something.  In fact, I would say that the playing of FFXII felt more like something was being done to me.  It was like someone had been hurting me, and then finally, after years and years of it, they stopped hurting me.

More than any of the previous games, it approximated what it would be like for an average Joe with barely any combat training, humble armaments, and an empty wallet to go out and wage war on monsters and fiends.  You would die quickly and often.  You probably wouldn’t want to go on living.  Your battle cry would be lifted from the knights of Monty Python and the Holy Grail: “Run away!”

Many role-playing games have the “monster in a box,” a monster that disguises itself as a treasure chest only to spring upon unwary adventurers.  FFXII has them.  It also has monsters disguised as save points.  That’s right.  Those things that normally heal you and represent refuge from the savagery of perpetual warfare.  Fake save points.  How messed up is that?

Treasure chests have specific locations throughout the world and dungeons, but they only appear some of the time.  Oh, any particular chest might hold one of several items, depending on mysterious conditions, so instead of getting, say, the rare penetrator crossbow you hoped for, you will get 16 gil. That’s if the chest appeared at all, which it didn’t.  So, I guess, consider yourself lucky?

To the west of the main town of Rabanastre lies the Dalmasca Westersand, a vast desert.  To the west of this lies the Ogir-Yensa Sandsea, an enormous desert.  To the west of this lies the Nam-Yensa Sandsea.  No, that’s not a lush forest; it’s a large desert.  And no, you can’t fly an airship over the Yensas because they’re Jagd.  Instead, you have to walk through the whole thing to get to the Tomb of Raithwall, who was the Dynast King, who was given deifacted nethicite by the Occuria, which is not to be confused with manufacted nethicite, which is entirely different.

I’m so glad this game is voice-acted, so I don’t have to imagine the appropriate way to deliver the line, “Zargabaath, do not tell me you join in this mummer’s farce!”

For no reason whatsoever, mummers are a big deal in this world.

To use any particular piece of equipment, you have to unlock the “license” for it by earning “license points” in fights.  But even after doing so, you still have to buy the weapon or armor you want to use.  Money comes almost exclusively from selling “loot.”  Loot, when sold in specific combinations, unlocks “bazaar goods.”  The game tracks the “loot” sold, but does not inform the player of either how many of each kind have been sold, or what combinations are required for getting any particular “bazaar good.”  You could create a spreadsheet and keep track of it yourself, and then hoard the “loot” until you have the preferred combinations as reported in your strategy guide, but then you won’t have any money to buy weapons and armor, which means you won’t be strong enough to defeat enemies for their “loot,” which means you won’t be earning many “license points,” which means you won’t be able to unlock the “licenses” for equipment that you couldn’t afford anyway, which means you’ll be closing in on 65 hours of gameplay, and yet you’re still using a freaking Ancient Sword that was already underpowered when you got it near the beginning of the game!

This is a game where opening any of four unremarkable and unmarked treasure chests near the beginning of the game dooms you to not being able to acquire the game’s most powerful weapon later on.  Who on the development team came up with such a needlessly cruel way of punishing the player?  And more importantly, what did they get from doing this?  I ask you, What did you get?!?

Oh, in case anyone cares, the supreme weapon in question is the Zodiac Spear, to be found in the Necrohol of Nabudis, in the region of the Nabreus Deadlands, in the kingdom of Nabradia.  I’m pretty sure this game has more names in it than the Bible.  (Lazy Bible writers, take note: there are no repeat names in FFXII.)

I didn’t know this term, “buffs,” until after I started playing this game.  After I had earned enough “buff” spells, I discovered an excellent strategy for staying alive: keeping my characters buffed at all times.  One by one, I buffed my characters.  Protect, shell, regen, haste, even bravery and faith.  And berserk on Basch to dramatically improve his killing potential.  I usually had to cast berserk on him several times because, yes, it can miss.  Ten minutes later, as I finished buffing out the last character, the first character’s buffs were already wearing off.  Sometimes, other people would watch me play the game, and would complain that this ritual buffing was tedious to watch.  To which I reply: imagine how I feel.

These strategies were ludicrous, but the power of the game was such that it made me think that completely crazy things were completely normal.  The moment I realized that I may have crossed the point of no return was when I stormed into a boss fight yelling at the TV, “We’re going to do this guy!  We’re going to do him into the ground!”

FFXII is the largest and most complicated game I’ve ever played; nothing else comes close.  I wouldn’t call my experience a love-hate relationship, because neither “love” nor “hate” reflects how I feel about this game.  It was more like agony and ecstasy – the agony of trying and failing to understand the gameplay on anything more than a superficial level, the ecstasy that came from giving in to the craziness, and allowing myself to engage the art in the most absurd way.

What is my lasting impression of the time I spent in Ivalice?  I believe Clive Owen said it best in The Bourne Identity as he watched his life force fleeing from him:

I was fortunately never victimized by that Zodiac Spear scam, but even I find that wikia entry somehow infuriating just to read. I don't know how accurate that info is, but I especially love the almost banal concluding sentence under "Requirements": "In the International Zodiac Job System version, the player no longer needs to beware of opening forbidden chests, as the whole concept was removed."

To put things in perspective regarding that 50 million HP guy, you should mention that it took you about 2 hours to take down a guy with only 200,000 HP.

This all reminds me of my time with Vagrant Story, FFXII's spiritual progenitor. That was a game where I would regularly find myself chaining together an awesome 20-hit combo against a foe, only to have every "hit" register as a miss or deal 0 or 1 damage. Plus, at the end of that combo, as punishment for going too big, the game would max out my "Risk" meter, so that my defense and accuracy would drop to almost zero, forcing me to drink several potions to calm myself back down mid-fight. Also, this would be just some ordinary random skeleton that would be kicking my ass. The story was not all that compelling either, so I'm not sure what kept me going to the end.

The really sad thing about that two-hour battle is that the outcome of the clash was very much in doubt for the first hour and a half or so. As my guys fell one by one, and I got closer and closer to having no characters in reserve, and as I was running around like an idiot trying to "charge" and regain magic points, I thought that just one or two extra-strong hits by the enemy, or one or two mistakes in strategy on my part would mean that I'd be down to one living character, who wouldn't be strong enough to endure, or fast enough to revive his/her mates. Truly, we were on the razor's edge.

I don't know if that makes the game better or worse, but I can only imagine how it would feel to spend what could literally be days fighting a guy, not knowing for several days whether you'd actually win the fight. I have read that you can leave the area and save and heal, and when you come back, Yiazmat's hit points will be where you left him, but even so, I don't get the appeal.

As far as Vagrant Story, I remember watching you make what looked to be painstaking efforts to get your character to strike a searing blow for 0 damage . . . over and over again. I remember thinking, you'll never catch me playing such a punishingly futile game. And yet, there I was, getting whaled on by random pumpkinheads, watching Balthier perish and being asked to "choose a new leader" while fleeing for the closest area exit.

When you were playing Vagrant Story, did you think, "That's the kind of uncompromising commitment it takes to get a perfect score from Famitsu"?

Not sure what Matsuno was committed to exactly. Before FFXII was finished, I think it must have been the nuthouse.

Not sure which brand of crazy is better, Matsuno's or Kawazu's. I have to believe that the Quickening system is a Kawazu invention; it smacks of his other chance-based slot machine innovations.