For years, I thought I was an RPG player of lordly caliber. It struck me like the Light of Judgment to realize I wasn’t an RPG fan. I was a Final Fantasy fan. 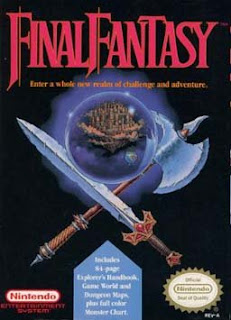 A few years ago, having vanquished nearly every Final Fantasy that was available stateside, including the most recent title, FFX, it occurred to me that I didn’t actually like RPGs much. I thought of the parade of abandoned RPGs in my history: Dragon Warrior, Breath of Fire, Seventh Saga, Robotrek, Secret of Evermore, Xenogears, Tactics Ogre: The Knight of Lodis, etc. Even a game that charmed and amused me, Super Mario RPG, was left unfinished. All genera were represented: fantasy, medieval, futuristic, strategic, comic. None could hold me.

And then I tried to think of non-FF RPGs I had actually beaten. Chrono Trigger, a perfect game, and perfectly redolent of the Final Fantasy aroma left by Hironobu and company. Final Fantasy Legend II and III, two good games rebranded for the Western market, but let’s not fool ourselves – they would wet themselves at being called “FF-lite.”

Others? Uh . . . Tales of Symphonia and Tales of Destiny 2? Games I likely would have skipped if not for the multi-player feature. Final Fantasy Crystal Chronicles? Despite the FF brand, I most assuredly would not have played the single-player mode. I hardly saw these last three titles as RPGs; to me, they were superlative three-man beat ‘em ups that I could share with my brother and sister.

Oh yes, there was Final Fantasy: Mystic Quest. Am I the only one who found some of that game’s puzzles to be infuriatingly taxing to a degree rarely plumbed by the main series? No matter; it was a forgotten curiosity – fun, but clearly the Sir Fratley of the FF lineage.

Most of the games above would not have existed if not for Final Fantasy. All except Dragon Warrior owe something to Final Fantasy. But the relevant point for my gaming life is that I bought all of the above games only because when I was in sixth grade, I played the original Final Fantasy, and ever since, I hoped to find something just as good. Other than Chrono Trigger, the only single-player RPGs that were ever as good as Final Fantasy were later Final Fantasies.

What made Final Fantasy special? It was never the genre that enthralled me. Sure, my fingers weren’t as nimble as some, and never in a million years would I ever beat a Contra or Mega Man game (legitimately). So I appreciated the menu-based clashes that RPGs ushered in. I can say this looking back, but at the time, playing the first FF, I didn’t consciously think to myself, “I’m glad this game doesn’t require manual dexterity,” or “Wow, it sure is fun to buy new weapons and armor all the time.” The RPG-specific elements were incidental to my experience.

What Final Fantasy has that most other RPGs (or games in general) don’t is the ability to make you feel like you’re experiencing more than a game, more than a series of button presses and pattern recognition.

All great games do this. Street Fighter is as technical a game as there is, but when you’re in the heat of the fight, that’s real heat, not a mechanical expression of button-pressing. Just the other day, I had a blissful run on the Garibaldi course using Kaori in SSX Tricky. No wipeouts, no collisions, but also no forced tricks or showboating. Just making the most of the game’s design without even realizing that I was manipulating a design. I was just there on that mountain.

A great gaming experience happens when the game creates visceral drama and passion in the player. RPGs try to do this with story, and for the most part, Final Fantasy has succeeded.

Glib gaming commentators often repeat the refrain that each successive FF is not a “true sequel” to the last. Alas, they never seem to be going anywhere with this observation, which is unfortunate, because to me, FF’s “non-sequel-ness” is the point. Final Fantasy is uniquely brilliant among gaming franchises because each game is a radically different experience from the last, despite not being radically different in its mechanics. Whereas most other series, when calving sequels, alter as little as they can about the aesthetic and gameplay of the original, for fear of alienating fans, each Final Fantasy game feels like it’s made from scratch. Again, not primarily the mechanics, but the story.

Yes, at the most basic level, the story is always: band of unlikely young do-gooders saves the world through unity and perseverance. But it’s the milieu, the aesthetic, the tone, the characters – so much detail goes into the FF world, so that it feels like a different world to save every time. The earthy domesticity of FFVIII feels nothing like the gritty fatalism of FFVII. Saving the world with Zidane in FFIX is meant to evoke the classic SNES era adventures, and yet its lyrical whimsy bears little resemblance to the martial grandeur of FFVI or the guileless romanticism of FFIV. Though we treasure that certain FF-ness that is part of the feel of each title, it’s the surprises that excite us, much more than the familiarity.

The former is like living in two different worlds. The latter is like living in two parts of the same world. Both are great experiences, but the difference is enormous, and the FF way is much rarer in the gaming universe. Which makes me question just how long it can go on. It’s already come crashing down like an injured airship in FFXII. For all my complaints about always feeling like a eunuch during battles, it’s the turgid storytelling that is sinking that game.

How many more great stories can Square-Enix come up with? I’m not sure, but I know that I will keep looking to Final Fantasy as the gold standard for great storytelling that turns a game into a living dream. I will look to Final Fantasy for the next game that can make me feel the way I did as a 12-year-old boy, mowing down imps on the plains of Coneria, sailing my airship over the continents, confronting the dreaded Garland, who was really Chaos, because he sent himself into the past, or rather into the future, then I went to the past, and somehow I killed him in two places, but he was stronger in the past, but then really weak in the future, and I don’t know how that happened, but I think he was the same guy, even though they looked different, and I can’t believe we survived an era with no save points in dungeons! . . . and, anyway, you get the idea.
Posted by Czardoz at 1:32 AM

You know, reflecting now on the glory days, I don't think I ever fully appreciated the depth and variety of the series. Watching just the opening sequences of FFVI and FFVII again, those games instantly set themselves apart as things unique and special.

On the other hand, FFXII left me yearning for something familiar to cling to.

I don't know what to expect from FFXIII, but I hope the series still has some good surprises left in it.

The credits crawl from the FFVI opening sequence: three armored suits marching through the snow, the town of Narshe slowly rising in the horizon, all set to one of Nobuo's most stirring numbers, and rendered in unforgettable Mode 7 - it makes for one of the most awesome moments in the series.