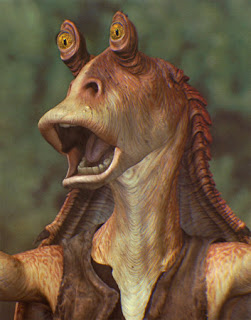 May 19, 2009, marked the tenth anniversary of the release of Star Wars Episode I: The Phantom Menace, and its hapless hero, Jar Jar Binks. As Jar Jar would say, “Yee gods! Meesa shocked at such long time passing!” Ten years, the age of Anakin Skywalker in the movie, when he met the Christ-looking Jedi master; the impetuous Padawan who would become father, mentor, brother, rival, and finally lightsaber-fodder to him; and that sexy older woman he would make his own. Ten years. Seems like a good time to look back.

Phantom Menace came out while I was in college, and was borne on a sail barge of hype that probably no other movie will ever again command. I purchased tickets online for the midnight premiere at Ford City, a suburban mall on Chicago’s South Side, far south of the University of Chicago. This was a time when midnight showings were pretty much unheard of, aside from the cult of The Rocky Horror Picture Show. This was a time before every mall you drove by had the name “Westfield” emblazoned on it. This was a time when online purchases were still new and unfamiliar enough to make me nervous about sending my credit card number into cyberspace. Amazon.com had just the “books” and “music” tabs back then, and the website was actually soliciting advice for its soon-to-arrive classical music store.

I and my best friend, Zach, made the journey down to Ford City together. He was the logistics man, planning out the series of bus exchanges that would take us there. Back then, as now, and ever since the prehistoric Greater Lake Chicago receded thousands of years ago, the South Side of Chicago was known as a wretched hive of scum and villainy. And enlightened though I was about civic relations, it was hard at that age to ignore such old saws as “Don’t go south of 60th Street.” That’s right where the University ended. Ford City was down on 76th Street. But it was a mall with a movie theater and it was showing Star Wars to hundreds of salivating fans, so how bad could it be? Zach strapped his wooden kendo sword to his back, just in case.

I’ll never forget that night, but the iconic image of the trip was the face of a black man on the bus as he stared at me, eyes as round and alarming as thermal detonators. Zach and I were the only non-black people on that bus. I sat nonchalantly, I thought, like a rookie football player reaching the end zone for the first time, knowing that it was best to act like “you had been there before.” Slowly, however, I sensed a disturbance in the Force. I turned my head to see that just across the aisle, a middle-aged man was gazing at me, not at all trying to hide the fact. I looked back, just because I thought it would be less offensive than to look away, and he just kept on staring at me with an expression that was one part bemusement, one part shock, and three parts utter bafflement. His expression changed not a whit, not even to blink. I thought I saw tears glazing over his eyeballs just to keep them moist. I’m sure he was just surprised to see a Chinese college boy on a South Side bus in the middle of the night. Hey, I was surprised to be that Chinese college boy. He probably doesn’t remember me, but much as a certain farmboy couldn’t get the image of a certain mysterious white-gowned princess out of his head, the image of that man and his bulbous eyes remains embedded in my memory.

At the theater, we saw some fellow U of C students, some with plastic lightsabers in hand, as well as dozens of other Star Wars devotees waiting for the midnight start time. But to my disappointment, there were no overtly delusional fanboys, as the media had led me to expect, with its stories of all manner of Jawas and Jedi standing in line for months. There was no one in full Chewbacca garb, nobody singing “Yub Nub,” no “I am your father” reenactments (random recitation, yes, but true reenactments, no).

If this were a movie review, I would write about the thrilling CG podrace, the light-speed two-on-one lightsaber duel, the music that only John Williams could write, the gratifying and inventive fan-service (C-3PO naked!), and whether the movie was worth the wait. I think it’s enough to say that the first note of the Star Wars fanfare and the first glimpse of the Star Wars logo, both unchanged from their 1970s glory, were greeted with the happiest response I’ve ever seen in a mass audience. I wanted to cry but hold it back, so that people could see me holding it back and thus appreciate how emotional I was. But I don’t think I held anything back, and I don’t think anyone was looking at anything other than the screen.

* * *
I can’t remember how long we waited for the bus, but by the time we realized it wasn’t coming, there wasn’t a soul around. All those Force-junkies had taken their landspeeders home; apparently, we were the only Padawans foolish enough to rely on public transit. There we were, maybe 3:30 in the morning, staring at an endlessly desolate parking lot, like the painfully featureless CG battlefields of Naboo. “Weesa in big doodoo,” I thought.

Checking the fine print on the bus schedule, we realized our mistake: the bus only ran certain hours, and not the hours we needed. We could either wait for dawn or walk to a station with an all-hours bus route. Why we chose the latter, I don’t remember. Don’t tell Yoda, but I guess we preferred adventure to patience.

I’d like to say we were like Anakin and Obi-Wan, brothers of the lightsaber, venturing side by side. However, I fear we were more like C-3PO and R2-D2, two bumblers wandering aimlessly through the treacherous Tatooine desert. We walked through residential neighborhoods full of modest houses and quiet streets. We walked on noisier streets, too, which in a way were more comforting. And though I was nervous and would still be nervous to walk in a strange neighborhood in the middle of the night, I looked at Zach and thought how lucky I was to be with my friend and to do this unlikely thing together. We took confidence in our good spirits and each other . . . and that wooden kendo sword. And as far as treachery, we found none.

I went to midnight premieres of the next two Star Wars prequels in 2002 and 2005. I would have been disgraced if I had waited for the morning. And as movies, I enjoyed them even more than Phantom Menace. My only regret is that I didn’t get to see them with Zach. I think the second time around, we would have been a bit more like Anakin and Obi-Wan (Episode II-style, not so much Episode III).
Posted by Czardoz at 3:08 AM

Personally, I've always maintained that Phantom Menace was the best of the prequels. It troubles me how quickly people can forget having cheered on first seeing it.

Really? Do you mean there were certain deficiencies in Episodes II and III, or was Phantom Menace just special in some way? For me, they go reverse chronological in terms of quality. But I'll never be as excited as I was when I sat down in that theater for Phantom Menace.

What troubles me is how people love bashing the prequels and using them as a whipping boy, as though everyone felt that mean way. I can say that these movies stick in my head, images and moments stick, in a way that doesn't happen with most movies, even generally good movies. I wish people would get off their high horse and feel the love that is Jar Jar.

It's entirely obvious now, but I remember back then, there was some small question about whether the new movie would mimic the intro of the old movies, or whether it would be different. How tragically misguided it would have been to change the look and style of the opening.

20th Century Fox fanfare, green Lucasfilm glisten, then that first bone-rattling note, and the yellow text on a starry background . . .

Maybe it's just preference, but I enjoy Phantom Menace the most because I find it to be a fun and brilliantly composed adventure, full of color and exhilarating sequences that gratify even out of context.

Attack of the Clones feels more like a thriller, and, to be honest, having waited three years for that movie, and knowing that I would have to wait another three for the next one, I originally had a lot of problems with the way it was paced.

I liked Revenge of the Sith much better, but it too is a much heavier, more plot-intensive film that, in my experience, cannot be viewed casually.

Now that they're all out there and available as a set, however, I mostly just take them as one work.