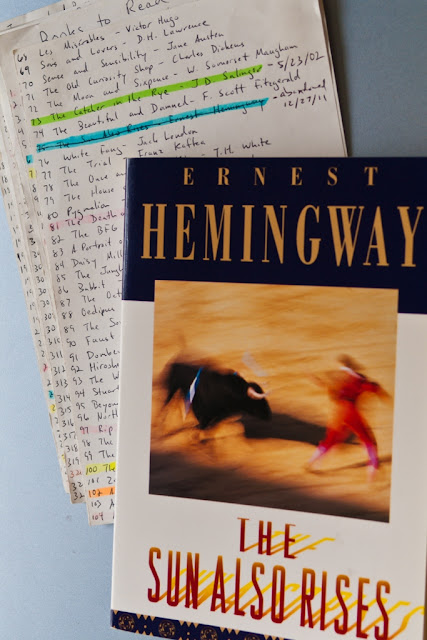 I’ve crossed Ernest Hemingway’s The Sun Also Rises off my reading list, not as “read,” but as “abandoned.” This is an unusual move for me, though not because the list is impeccable. On the contrary, the list was made by my college-age self, and beyond the several dozen canonical works that were obligatory, many of the books on there are simply things I had heard of or other/lesser/obscure works by authors whom I had either read or who were moderately well-known. So it’s quite possible that I’ll come across so many dogs on this list that I’ll have to order a rubber stamp that says “abandoned,” maybe with a cartoon Dante next to it.

Up to this point, the only abandoned books on my list were some works by C. S. Lewis, because they were intellectually juvenile and thought themselves far more clever than they actually were. The college-age Czardoz was not nearly wise enough to realize that this is to be expected from the man who gave us Aslan, the Jesus lion.

The Sun Also Rises, on the other hand, had some genuinely clever and insightful moments during the 90 or so pages I got through. And having read sufficiently from Hemingway, I don’t doubt his intellectual maturity. The problem with this book is that, by and large, it’s boring. This greatest of all literary crimes unavoidably stems not only from the plot, but largely from the Hemingway style, here at its most obnoxiously brutal. The book seems written more as an exercise in his trademark economical style than as a deeply felt exploration of the characters’ relationships and aspirations. The art is formal, not emotional.

The overall effect is that every single character talks like every other character, so that when Hemingway omits the identifiers in long stretches of dialogue, I invariably lose track of who’s saying what. Here is just a mild example:

I know I’m supposed to know who’s who based on characterization, but again, Hemingway’s characters all share a sort of Lost Generation cluelessness and cynicism. More than a few of the characters are swaggering blunderbusses, and all share an affection for snark, as though sincerity were simply passé. Even the purported protagonists have little to do but bemoan their lives through plastic sneers.

Lest you think I’m unfairly picking on dialogue, the narrative prose is no better. Witness the following banalities:

There were pigeons out in the square, and the houses were a yellow, sun-baked color, and I did not want to leave the café. But we had to go to the hotel to get our bags packed and pay the bill. We paid for the beers, we matched and I think Cohn paid, and went up to the hotel. It was only sixteen francs apiece for Bill and me, with ten per cent added for the service, and we had the bags sent down and waited for Robert Cohn. While we were waiting I saw a cockroach on the parquet floor that must have been at least three inches long. I pointed him out to Bill and then put my shoe on him. We agreed he must have just come in from the garden. It was really an awfully clean hotel.

I guess you have to be fairly talented to make a trip to Spain sound dreary. This relentlessly sterile reportage is the least attractive trait of the book. It’s as if Hemingway learned his trade from a court stenographer. I feel like I’m reading all the parts of the story that are supposed to be left out. You know how people sometimes ask, “Why don’t we ever see characters in movies use the bathroom? Are we supposed to believe that they never have to go to the bathroom?” Well, The Sun Also Rises is all bathroom.

I’m reading The Invisible Man by H. G. Wells right now, and I’m not going to say that it’s a better book than The Sun Also Rises; it’s not.  It’s emotionally shallower and the writing is undistinguished, but at least the story interests me enough to want to know what happens in the end. The Sun Also Rises, as far as I can tell, is about the enormously traumatic impact that a whole lot of nothing can have on a sad bunch of nobodies.

I know that the art of the literary hatchet job, though time-honored and often delightful, can also seem rather petty. It’s not my belief that I understand books better than other people, and that dumping on a bad book in itself makes for worthwhile blogging. That seems more the demesne of movie reviewers. Rather, what is more valuable than any text in itself is that it be read, and it’s the relationship between the reader and the book that is worth writing about.

If my reading seems lacking, then let’s look at another reading. According to The New York Times (as blurbed on the back of the book), The Sun Also Rises is apparently “lean, hard, athletic,” while somehow simultaneously being “beautifully and tenderly absurd.” In other words, it’s the literary equivalent of Brett Favre. Indeed, I think Favre is just the kind of guy that Hemingway would have liked: a wounded warrior, a lover of unattainable women, freighted with self-worship and unable to recognize that he had become a joke. Perhaps I go too far with that last bit.  But then I read something like this, and I wonder if the joke is on us:

I miss Brett Favre. Is that strange?

I must confess, after several attempts to get through your selected boring passages, I finally "abandoned" the endeavor. With this rubbish for bedtime reading, I don't understand how you could have a hard time going to sleep.

You probably thought, good grief, when Favre kept unretiring, and then, good riddance, when he finally left the scene. But now you look back and realize that against all odds, he had become Charlie Brown, with the football always being pulled away from him at the last second.