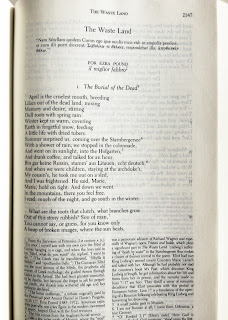 I decided to give myself a short reading week by tackling a long poem, and though objectively, The Waste Land is not very long, it is certainly dense enough to qualify for my week’s “book,” as there is as much to unpack in its 434 lines as there is in many books of 200 pages or more, and as I write this, I continue to struggle to understand it as a whole work, as its fragmentary nature seems to create rifts with only fraying rope bridges to span them, Indiana Jones-style.

T. S. Eliot simply won’t go away. I read The Hollow Men in high school, The Love Song of J. Alfred Prufrock in college, and now in my one-student schoolroom, The Waste Land. Though these poems aren’t even a hundred years old, they seem to have that quality of literature that endures – the words sound both old and new at the same time, the technique both shocking and classical.

At first I didn’t enjoy reading The Waste Land, though I’m almost certain that “enjoyment” was not T. S. Eliot’s primary concern in writing it. I couldn't see myself reading it for any other than purely academic purposes, going slowly, line by line, in the hopes of some kind of, I don’t know, revelation?

I was reminded of something that a colleague once said to me about reading James Joyce’s Ulysses: “It’s the kind of book where, you first have to learn everything else there is to learn, then you can read Ulysses and understand it.” I felt a bit of this helplessness before the opaque mass of The Waste Land. Much of it consists of hopelessly obscure and self-consciously erudite literary references, things like the Upanishads, St. Augustine, Grail lore and the Fisher King, Buddhist texts, and so on. The fact that Eliot himself appended footnotes to the published poem suggests his awareness that he was plumbing some deep waters, and I may be forgiven if I detected a smug self-indulgence on Eliot’s part that seemed to say it would be well worth the reader’s time to try to understand all this stuff.

But in the end, as with The Hollow Men and Prufrock, the words, and thus the greatness, seem inevitable, and I did begin to enjoy the poem altogether, and not just isolated lines, during my second reading. As academic as it is, the poem is not purely cerebral; it is a highly emotional response to the metaphorical wasteland of Eliot’s culture and times, where the soul finds no water, no respite, no nourishment whatsoever. And yet when water comes, it is “death by water,” as if even that singular element which sustains hope is ultimately antithetical to human flourishing. Themes of isolation, death, the feeling of being trapped inside your consciousness – it all spills out even if you’ve never read the Upanishads (which I haven’t) and have no interest in listening to a Wagner opera (which I don’t).

The Waste Land begins with the famous line, “April is the cruelest month,” which, aside from its quotability and coolly nihilistic irony (see its inclusion in The Big Lebowski), doesn’t really mean anything in itself. When you continue on a few lines, an idea begins to cohere:

April is the cruelest month, breeding
Lilacs out of the dead land, mixing
Memory and desire, stirring
Dull roots with spring rain.
(1-4)

I first encountered lilacs in Chicago, where they bloom sometime in the spring, a sort of brightly colored affirmation that winter doesn’t actually last forever in the Windy City. Lilacs have a wondrous and unmistakable scent, a “perfume strong,” as Walt Whitman put it; but as readers of Whitman know, they don’t bloom for very long, and when they die, the little purple flowers turn brown and shriveled. Perhaps Eliot found something cruel about the way spring beckons life to sprout out of the comfort of hiding in the ground, only to bloom briefly and perish in the sun and air.

Like a lot of poetry, The Waste Land can seem terribly contrived, as if Eliot’s just dishing out a slew of images and telling us to make sense out of them. He uses a variety of styles, bits of dialogue, short ditties, scraps of what look to be gibberish and/or bird sounds, several lines in foreign languages. He even manages to insert a perverse sonnet into the poem to describe a banal seduction (what was once perhaps called a “courtship”), in effect subverting Shakespearean love using Shakespeare’s preferred form:

The time is now propitious, as he guesses,
The meal is ended, she is bored and tired,
Endeavors to engage her in caresses
Which still are unreproved, if undesired.
Flushed and decided, he assaults at once;
Exploring hands encounter no defense;
His vanity requires no response,
And makes a welcome of indifference.
(And I Tiresias have foresuffered all
Enacted on this same divan or bed;
I who have sat by Thebes below the wall
And walked among the lowest of the dead.)
Bestows one final patronizing kiss,
And gropes his way, finding the stairs unlit . . .
(235-248)

I only seriously considered the problem of contrivance after having read the poem twice and written a few pages about it. One of the great annoyances of bad acting, particularly on the stage, is that you can see the actors “acting.” It’s entirely unnatural and takes me out of the performance.

As I mulled over Eliot’s pruned images and manicured technique, that thought occurred to me, that a reader would see the ink and paper equivalent of “acting.” But for me, at least, the effect is like riding that neatly stitched seam that hides the ragged edge underneath. I knew that some maniacal effort went into the making of this object, and I was perhaps just on the cusp of seeing that effort, when I realized that I was so deep into the finished effect that any considerations of  how it was made became, well, purely academic. Despite its footnotes and literary allusions drawing attention to the places it came from and the places it wants you to go, Eliot’s poem just seems to exist.

The following passage ends with my favorite line from the poem:

What are the roots that clutch, what branches grow
Out of this stony rubbish? Son of man,
You cannot say, or guess, for you know only
A heap of broken images, where the sun beats,
And the dead tree gives no shelter, the cricket no relief,
And the dry stone no sound of water. Only
There is shadow under this red rock,
(Come in under the shadow of this red rock),
And I will show you something different from either
Your shadow at morning striding behind you
Or your shadow at evening rising to meet you;
I will show you fear in a handful of dust.
(19-30)

Ashes and dust, shadows and death. It’s been a somber year for literature. So next week, “something different,” something fun!
Posted by Czardoz at 11:46 AM