A Game of Chicken

You have surely heard that the Chick-fil-A chain of chicken sandwich restaurants has been taking a beating lately in the liberal media for the proudly unambiguous anti-gay statements made by its president, Dan Cathy, which he has backed up with significant financial contributions to gay-unfriendly organizations. Considering that he runs an empire founded on poultry, perhaps one is not surprised at his willingness to ruffle some feathers.

Just before the flap began, I happened to go to a Chick-fil-A for one of their breaded chicken sandwiches. I first tried their food a few years ago, and thought they offered a flavorful sandwich at a reasonable price, and most notably, in a very clean and friendly environment. I was, however, taken aback by an odd marketing and signage campaign featuring cows foisting deliberately misspelled slogans in a particularly heinous font. Imperatives such as “Eat mor chikin” and a special promotion, “Dress like me, git free chikin,” acquired a decidedly ominous, even fascistic glower, which didn’t seem in keeping with the chain’s otherwise homey aesthetic. Upon further thought, this perhaps is meant to evoke the quaint rusticity of the chain’s Southern roots, or else leaves open some speculation about fundamentalist Christianity’s anti-intellectual tendencies. 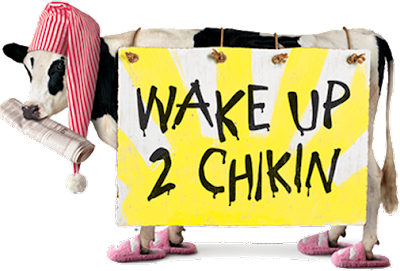 The sun's rays are oddly reminiscent of iconography from WWII-era Imperialist Japan.

At my latest visit, the service was once again pointedly friendly. The teenaged girl who took my order flashed a brilliant smile full of braces, certainly more welcoming than the usual McDonald’s employee, who tends to have the disgruntled visage of one of Bane’s henchmen in The Dark Knight Rises. A woman who appeared to be the store manager walked out from behind the counter to bring me my takeout order, and asked if I wanted their “special Chick-fil-A sauce” with it.

After the bad press began, I wondered, would the service have been any worse had I ordered my sandwich while sporting a rainbow flag t-shirt, or if I had tried to regale the staff with tales of my ribald shenanigans at the local Pride Parade (which happened to take place just as this henhouse kerfuffle began). On the flip side, how should I go about treating them, now that their company-sanctioned bigotry has become newsworthy?

Boycotting Chick-fil-A, that is, making a stand with your wallet, is undoubtedly good for your conscience, your finances, and your waistline – a win-win-win situation. But I wonder if it’s any kind of solution at all, in light of all the other institutions and corporations that so deftly dodge the rather narrow purview of our consciences.
Civil rights offenses are a favorite whipping boy of the media, and furthermore, they seem to penetrate down to the sensitive emotional core of the populace, laying waste to more family dinners and love affairs than comparatively benign topics such as abuses of human rights (Chinese workers slaving away to make Apple products) or the ravages of economic inequality and immobility (working for minimum wage at McDonald’s/Target/Wal-Mart/etc.). Beyond mere rights and privileges, I’m sure there are a whole host of other evils associated with just these few companies I’ve mentioned, ranging from environmental to political and so forth. But not a lot of people (gays included) get indignant enough to throw away their iPhones or stop shopping at Target (itself a company with a history of both angering the LGBT community and seemingly pandering to its purchasing power).

No person can stand up for every good cause, nor should he be expected to. But every “Chick-fil-A moment” seems to me a signal, a cock crow (if you’ll indulge the pun), to align one’s life along the trajectory of justice.
I am reminded of Henry David Thoreau, who wrote:

It is not a man’s duty, as a matter of course, to devote himself to the eradication of any, even the most enormous wrong; he may still properly have other concerns to engage him; but it is his duty, at least, to wash his hands of it, and, if he gives it no thought longer, not to give it practically his support. If I devote myself to other pursuits and contemplations, I must first see, at least, that I do not pursue them sitting upon another man’s shoulders.
- Resistance to Civil Government, aka Civil Disobedience

There is a game of chicken afoot, but it’s not a game played against a corporation or a bigot or even a socioeconomic paradigm that fosters such strife and selfishness; rather, it’s a game you play with yourself. You test yourself against your willingness to engage in activity that is unworthy of you. Let us see which is the stronger.
Posted by Czardoz at 11:53 PM