Recent coincidence: right around the same week that street artist Shepard Fairey was featured as a guest star on an episode of The Simpsons (“Exit Through the Kwik-E-Mart”), he also pleaded guilty to a misdemeanor charge relating to his inappropriate use (or outright theft, as some might call it) of a photograph that was the basis of his widely-seen “Obama Hope” poster. 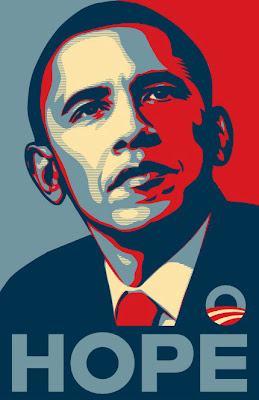 This image is likely familiar to most people from its connection to and use during Barack Obama’s presidential campaign in 2008. Though I didn’t know his name then, I was previously familiar with Fairey’s obnoxious “Obey”stencil, which was parodied as the Homer “Dope” stencil from that same Simpsons episode. 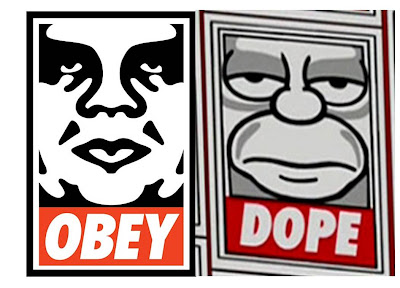 Also of note is the Simpsons episode itself, which I thought was one of the funnier ones in recent memory (though the Internet yet again spills bile from its contrarian spleen). The couch gag mystified me at first, because it was a parody of the opening credits sequence of the show, Game of Thrones, which I had never seen. Of course I knew it was a parody of something (over the course of 500-plus episodes, what hasn’t been parodied by The Simpsons?), and I find it amusing that here’s a show that regularly exercises its fair use rights presumably fairly, while guest star Fairey actively covered up his use of the template for his most influential work. Ironically, on the episode, Fairey plays a character on the right side of the law, busting street artist Bart Simpson, whom the establishment considers a mere “Vandal Van Gogh.” That leads to my favorite exchange from the episode:

Chief Wiggum: I don’t traffic in wordplay, Kent, but I do have a message for Mister Prank Lloyd Wright –

Chief Wiggum: They’re all artists, Lou, why don’t you open your eyes?

Indeed, I’d like to believe that different kinds of art are all equal, though I wonder what this case says about the relative value of art. Should we consider the “Obama Hope” poster a sort of collaboration between photographer Garcia and street artist/stenciler Fairey? Without the former, the latter likely would not have created the iconic work. On the other hand, one wonders if Garcia even considers himself an artist – he is after all a press photographer, at least in this instance. And it’s certainly fair to say that his photo of Obama, and the photos taken by the photographers on his left and right at the same event, their camera shutters firing within mere milliseconds of his own, would never have been seen by anyone as anything other than journalistic documents, hardly worth a glance, whereas Fairey took that and created something that affected people in a larger way. And yet, the photo did deeply affect at least one person – Fairey; otherwise he wouldn’t have been so inspired.

Maybe the dude just Googled "obama pix", and that AP image was the first thing he got. I don't find it an especially inspiring shot, in and of itself. To be honest, when I look at the original photo, it's not even familiar to me unless placed next to the poster.

But, yeah, it's pretty sleazy that he tried to cover up what he did, although I think it was only credit (and money) at stake, not art, and only the AP and Garcia's credit, not his own. To me, whether the poster was an entirely original work or based on a photograph has no bearing on its artistic merit (whatever that may be), nor would it have lowered my opinion of Fairey as an artist, had he given due credit for the photo from the start. On the other hand, hearing what a liar he has been has lowered my opinion of Fairey as a human being considerably (from apathetic to negative).

That said, in China they're laughing at us. Just sayin'.

Yeah, in my mind, I thought I had more to say about this topic, but when I started writing, I realized that I was most interested in the Simpsons episode, and less interested in Fairey's venal attitude toward deception.

I don't know if he saw the photo and loved it, or had the idea beforehand and just Binged "obama pix." Either way, I find the finished product and the source material to be rather mundane.

As far as China goes, I've been there, and I didn't see a lot of laughter, or even smiling faces. In fact, I saw a homeless panhandler who had no legs. I also saw a pack of kids behaving like wild animals in one of the rural villages. So who has the last laugh? Well, not me, because I don't laugh at stuff like that.

If I learned that Leonardo Da Vinci based the Mona Lisa on a mediocre painting by Michelangelo but only through Da Vinci's artistic perspective could it evoke emotional, technical and/or political inspiration, I would say the core differences make the credit almost irrelevant. But when it comes to things like Fairey's propoganda, sampled songs in hip hop, or recycled bible stories in movies, the reincarnations are lame, domesticated shadows of the originals rather than an elevation towards beauty. Like they joked in the episode, the standards for art are arbitrary when set on a backdrop of money and hipsters.

Also, I think Bing was doomed from the beginning because their verbjugation reads like something much less whimsical and much more deleterious to your liver.

I finally got that liver reference. . . good one!

I agree that one artist taking from another (or from a historian, or reporter, etc.) is fair game. I'd still like to get credit if I were the source artist, if only to bolster the possibly imaginary spirit of collegiality among artists.

I can chime in on this post, as it is really black letter law here and nothing about the value of the art. To me, the black and white of it is that the AP image used was a copyrighted image. By law, in order to have fair use of the copyright, he should have sought permission. There are exceptions to the "fair use" law, which Is summed up here: http://fairuse.stanford.edu/overview/fair-use/what-is-fair-use/, but Mr. Fairley's use falls into neither of them. Parody is an exception, which is why South Park and The Simpsons don't have to seek permission legally each time, but you bet they do for licenses of certain characters or music used on the show. Hence AP filed a lawsuit for copyright violations. It's not fair game that he misappropriated and AP was right to call him on it.

What I don't get is why he went to such lengths to lie about, to extent of destroying evidence? Why did Mr. Fairley have to commit a physical crime of it? That is where the federal criminal suit came in. He should've received a harsher sentence than given for destruction of evidence. That's awful action at the time to commit a further crime to cover up his first crime.

Proper credit is important -- the law sees that and kind of stems from ethos, morality, and justice, right? It cannot be a collaboration if the other party isn't permitting the effort; rather it is misappropriation and not of value of things. I actually hadn't heard about this case at all. Very interesting.