Eye of the Bewildered

When I was a child, I relished the chance to go to Balboa Park on Sundays. Sunday was the day of the street performers (these days more fashionably referred to as “buskers”). The most entertaining and memorable was a nearly legendary magician who captivated El Prado, the main drag, with his array of parlor tricks, including my favorite – tossing a playing card from ground level all the way up to a second floor veranda.

One of his lesser gags was borrowing a pair of eyeglasses from an audience member and pretending to clean them with a cloth, only to drop a small piece of clear plastic, “shocking” the crowd into thinking he had accidentally popped the lens out of the frame. I don’t remember why this was considered magical in any way, but I remember wondering if the gambit caused tiny heart attacks in the owners of the glasses. I can only hope that their vision was as bad as mine, in which case the whole mise-en-scène would have been a blur.

One day, Mr. Magic picked me and my glasses out of the crowd. Though I was delighted at being included in the performance, I was discomfited by a fact unbeknownst to him – my glasses were of a particularly shabby quality, having come from a discount optical outfit that was briefly popular back then, and consequently, one of the lenses was finicky and would come loose from the frame with the gentlest jostle. Sure enough, I watched the poor man apply his cleaning cloth to my spectacles only to find that the spectacle, indeed, was himself. My actual lens came tumbling down like the severed head of St. Paul, bouncing three times on the pavement. I imagine the first thought that ran through his mind was “Busted!” or “¡Ay, caramba!” or the like. I knew it was coming, and watched with a mixture of helpless inevitability and anxious bemusement. I could have told him not to use my glasses, but I didn’t think that it would seem convincing coming from a little kid. He may have thought I was afraid to share the spotlight, which was certainly not the case. No, he’d have to see for himself. After that, my name was mud in the busking community.

I was recently asked when my vision started to deteriorate, and consequently, when I started wearing glasses. It was sometime in second grade. I sat in roughly the middle row of my classroom, and, though I can’t remember whether it was a gradual or a sudden realization, at some point I ceased to be able to read what the teacher wrote on the chalkboard. (No, sissy children of the 90s, there were no whiteboards back then.)

I was further asked whether I told anyone about the problem, and I could only answer that, at the age of 7, I didn’t have the cognitive ability to discern the problem. I may have been dimly aware that the chalkboard was blurry, but as long as no one else said anything about it, how was I to know that something was awry? It didn’t occur to me to raise my hand and say, “Miss Silva, why do you look like a Monet?” And anyway, she may have taken this as a compliment.

Now that I reflect on this, I think the powers that be may have discovered my vision deficiency when I was asked to read something aloud off the board from where I sat, whereupon I had to say that I couldn’t make it out. I probably still didn’t understand it as a problem. Perhaps I took it for granted that any person in my seat wouldn’t have been able to make out the words either.

Shortly thereafter, I joined the league of bespectacled gentlepersons.

The lasting legacy of l’affaire des lunettes was how it made an awkward child feel even more awkward, especially on class picture day. As the only eyeglassed student in my class, I was the only one asked to turn my head at an angle for my photo. Apparently, either film technology or these snapshot-for-hire type school photographers were too primitive to take a flash photograph of a kid in glasses without catching glare off the eyeglass lenses.

Each year, my parents ordered a one-sheet with thumbnail-sized photos of the whole class (I think it was popular at the time, and probably even more so when my parents were of school age, to keep pictures of one’s classmates), and there I was, the only small fry among these 30-odd portraits who was gazing somewhere off to the side, into the unseen mystery. What was the alternative? I suppose I could have taken my glasses off for the photo, but no one ever asked me to, and there’s the rub.

For my begoggled brethren (and here I mean my fellow full-timers, not reading-glass dabblers or other “casual” eyeglass wearers), glasses become embedded in the way we look. They become a part of our identity in a way that people without glasses (or, “two-eyes,” as we call them) simply can’t understand. Had I doffed my glasses, I would have been able to stare straight into the camera, but I wouldn’t have been myself.

To make a comparison (and a digression): a person known for a fussy, preppy style of attire can suddenly adopt a Goth wardrobe, and people will say, my, how different he looks. Similarly, the glasses you choose represent your style and attitude, and if you have long been swaddled in the severest “German architect” frames, you can scarcely don a pair of Lennons, let alone go full Geordi, without drawing attention from acquaintances. But the analogy can go no further without strain, because there is no reasonable sartorial analogue for the glasses-wearer who switches to contact lenses or undergoes Lasik. Once glasses are a part of who you are, you look naked without them, maybe even a little alien. Sound like an exaggeration? See for yourself: 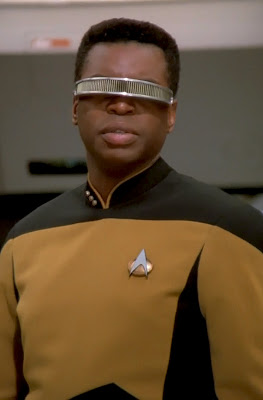 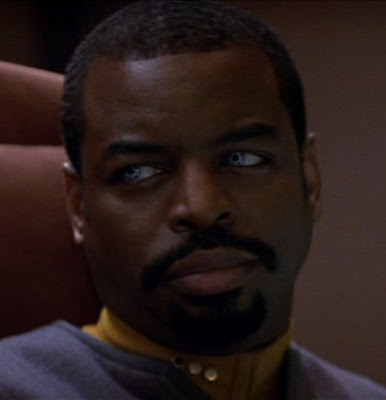 The photos above suggest to me that perhaps facial hair is a reasonable analogue to eyewear. I mean, now that we’ve had this:

. . . can we really believe that this is the same person?

Of course, facial hair is an easier fix than myopia, and it doesn’t apply to the distaff population (circus folk notwithstanding). More to the point, though, neither clothing nor facial hair creates a literal and metaphorical barrier of perception between the person and the world. Though clothing is a barrier, it doesn’t compare because we all wear clothes in public. As for a beard, it hides at most your mouth, which is merely the window to your stomach, not the window to your soul. (Unless you’re Homer Simpson, in which case your stomach is your soul.)

Perhaps I overestimate this barrier of perception as a thing that distorts the way people see me.  In reality, the person most affected by the barrier is not the one looking at the lenses, but the one looking out through them. It’s not only that people see the glasses before they can get to you; you, too, only see the world through a filter. It may be the clearest, most polished and happily anti-reflective filter in the world, but it’s still a kind of wall that reminds you of some defect in yourself that necessitated corrective measures.

People can see me with or without the glasses, and it probably doesn’t make a critical difference to them. But I never see myself as the person without glasses, for the very simple reason that I can’t. My eyes aren’t good enough. There is no point in looking at the mirror without my glasses on because I’d have to put my face three inches from it just to see my reflection clearly, and this rather defeats the purpose of trying to see myself in a normal way and as a normal person without glasses. As far as I can tell, without glasses, I am an alien, if only from myself.

So shall I say, once a glassman, always a glassman? I could wax poetic about the charm of seeing the world out of focus when I wake up in the morning, but that would be like extolling the virtues of the music of the deaf. And I wonder what it feels like to be Geordi after, seeing the world the normal way, without a machine in between. I can’t remember what that was like.


Whether the vision is perfect or flawed, it does seem like there is something authentic about taking the glasses off. Maybe this is because, as a child, I learned everything I needed to know from Star Wars, and one of the lessons is that the mask has to come off for Darth Vader to become Anakin again:

Just for once, let me look on you with my own eyes. – Darth Vader
Posted by Czardoz at 11:51 PM

So how did the crowd react at the blown magician?

You only briefly mentioned contacts and laser eye surgery, the former of which you've worn. How did life appear through those lenses?

I don't recall exactly what happened with the crowd, but the magician seemed briefly nonplussed, but then laughed it off and gave me back my glasses. I don't remember if he tried the trick with someone else, but I doubt that the crowd would still "have it" after seeing his gaffe.

Regarding contact lenses, I wore those for the better part of four years - all of high school and most of my first year of college. At first, they were great, and though people who had known me long enough thought it rather odd that I was suddenly unleashed from the glasses, the novelty wore off. I eventually alternated them with glasses when the contacts started irritating my eyes. When replacement contacts didn't help, I finally dropped them and went back to glasses full time, and have never looked back. Now, the only time I wear contacts is when I compete in dance competitions, mostly because judges like seeing your unobstructed face, but also because I sweat a lot while dancing, and glasses make it harder to wipe my face.

I liked the contacts because, for the first time in a long time, I felt like I could do normal things - play sports, wear sunglasses, look directly into cameras, etc. The fact that I didn't necessarily do exciting new things made possible by the contacts, plus the hassle of cleaning them daily, plus the occasional "popped" lens (a few times, even regular blinking would pop my contact out), plus the irritated eyes - all these realities combined to destroy the illusion that I was "normal" now. And it was an illusion I never really believed in.

And that's basically how the world looked - just the same as with glasses. What changed, of course, was being able to see myself in the mirror and clearly seeing a face without glasses. I suppose during the years of regular wear, I got used to that face. But nowadays, I always look like a stranger to myself on those rare occasions when I bust them out. It's like my eyes are too big, or my nose too long. I can barely remember what it was like to wear contacts every day. I can't say I miss them.