I’ll have what he’s having, and make mine a double 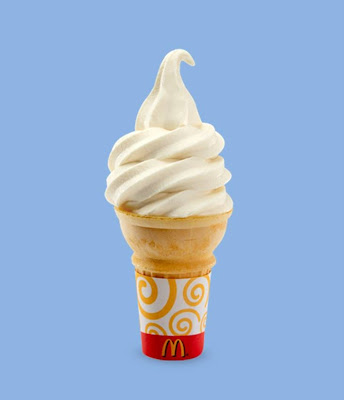 So I was at McDonald’s the other day, and I notice sitting to my right is some old geezer eating a McDonald’s ice cream cone.

Good day to be an old guy, I thought.

Then, I notice that there is a second ice cream cone resting on his tray.

So I says to myself, does he have a grandkid scampering around here somewhere?

Old guy walks outside to get some sunshine, leaving the uneaten second cone. While he’s out there, I see that next to his tray is a 32 oz. Big Gulp from 7-Eleven, already drained, presumably down his gullet. While I’m considering the Big Gulp and noticing the distinct lack of children nearby, the elder statesman comes back inside, picks up the remaining ice cream cone, and starts to eat that too!

At this point, I’m wondering, have I entered the Twilight Zone? Who made him lord of the universe, that he gets to eat two ice cream cones in one sitting? After already downing a Big Gulp!

I am aghast. I don’t mean to judge, and I must admit that when I compare his plate to mine, he was traveling light:

He had some other edible item on his plate, but I don’t remember what, lost as I was in the haze of ice dreams. And that, much more so than caloric intake, is the point of this story.

I think I was just jealous that he had the stones to buy two ice creams, and here I was eating fast food and rationalizing it by choosing moderately priced and reasonably skinny protein-rich items. As far as the Coke, hey, it was a broiling hot day.

Maybe when I’m 95 years old, I thought, I can be like this old-timer. No. Three ice creams!

THE MORAL: It would have been leaner to have ordered two ice cream cones instead of a McDouble, and I could have congratulated myself on going veggie.
Posted by Czardoz at 9:29 AM

Email ThisBlogThis!Share to TwitterShare to FacebookShare to Pinterest
Labels: food and drink, summer

He was a 95-year-old geezer. What did he have left to prove? Or whom left to impress? Time to congratulate himself on finishing the race. Or perhaps make up for lost time (and lost ice creams).

So you're saying the real take-away here is not to wait until you're 95 years old. We should all be eating two ice creams a day RIGHT NOW!