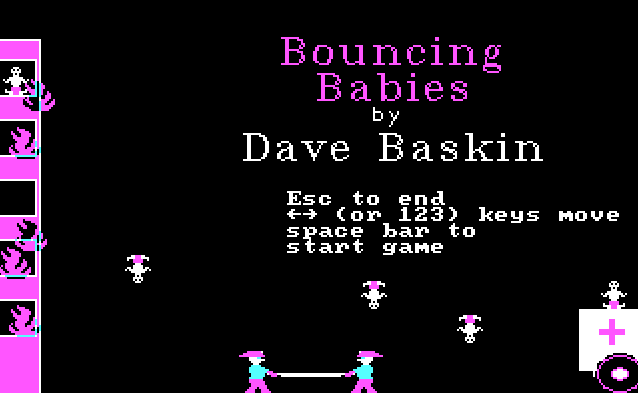 The first personal computer in my family was an MS-DOS-based machine, though it wasn’t very “personal.”  I don’t know what the brand was, or if it even had a “brand” in the normal sense of the word.  In the time that it loitered in my home (probably several years), all I ever really extracted from that humming box of chips and wires was a game called Bouncing Babies, which challenged the player to rescue purple pixel babies tumbling out of the windows of a burning apartment building.  I controlled a trampoline wielded by firemen at ground level, and the goal was to catch the falling babies and bounce them to the safety of an ambulance.  Kind of like Pong or Breakout, but with imperiled infants.

Oh, I also learned the neat trick that if you typed “DIR” into the DOS prompt and pressed Enter, you could bring up a directory of all the files on the computer.

That was it.  That was all I ever learned to do on that machine.

I think I was in 6th or 7th grade, and around the same time, I was playing Oregon Trail in computer class at school on an Apple IIe.  Here was a computer that was almost as old as I was, the best that public school funds could procure for my technological edification, and I got just as much or more out of it as I did on my newish home computer, supposedly a cutting-edge device.

But let’s be real here.  I had a Nintendo.  What were bouncing babies and death by dysentery compared to Mario and Final Fantasy?  Heck, even the Atari 2600 outclassed the foolishness of playing games on a keyboard.  If this was what personal computing was, I could pass.

Of course, no one ever taught me how to use DOS, or even the Apple IIe.  And I suppose that was the point.

In those neophyte days, I remember being reassured by a family friend, who worked in the software industry, that the computer was just a passive, slavish machine.  It can only do what you tell it to do, so I shouldn’t feel intimidated by it.  And yet, unless you were a software engineer, there was no intuitive way to know how to tell the machine to do anything.  It should have been obvious to everyone that the easier it was to tell a computer how to do things, the more enjoyable and useful a computer could be.

Throughout my life, I have come late to computer technology, internet innovations, even (especially?) viral phenomena.  I sent my first email in 1997, just before entering college.  I bemoaned the inexorable drift away from handwritten missives.  As I warmed to the idea and practice of email, I still insisted on writing a date at the top of every email I sent, as though it were a formal letter.  Yes, I wrote the date.  Even though the date and even the time were automatically stamped.  Every email.  Oh, and back then, I wrote the term as “e-mail,” with the hyphen.  I wasn’t the only one, but maybe I was the only one who did it on principle, instead of succumbing to the slurred, lazy, and (in my mind) inaccurate “email.”

In college, I found out from friends about downloading music online.  That’s right, mp3s, the term that for a few years replaced “songs” in the lexicon of cyberspace (do people still say “cyberspace”?).  We would go to a website called Scour, download their downloading program, and then search for any random song we could think of.  This was well before any talk of legality or piracy.  Nor did we worry about viruses and Trojan horses.  We were like boys stumbling upon a stash of fireworks, or hillbillies discovering oil.

And yet I remember saying it was “a fad.”  I had the curmudgeon’s gift of grouse; Andy Rooney would be proud (I mean, he would be if he weren’t such a curmudgeon who hated everything that was born after the Battle of the Bulge).  I couldn’t deny the thrill of downloading “Secret Agent Man” by Johnny Rivers on a whim and listening to the 128kbps mp3 file on my computer’s tinny speakers (satisfyingly retro, hissy like a vinyl record on a turntable, or better, a wax cylinder on a phonograph – ask Andy Rooney for details).  But I started to get tired of simply sitting in front of a computer searching for songs all night long.  Eventually, I ran out of songs to look for.  My mind couldn’t contain that many names.  I couldn’t see how other people wouldn’t get tired of this activity.  And then there were some songs I desperately wanted to acquire, but that were nowhere to be found (“Halah” by Mazzy Star; yes, it was the late 90s).  What would I do then?

Just as I came very late to the internet and technology game, I came very late to an appreciation of what Steve Jobs was.  When the announcement was made in August that Jobs was stepping down as CEO of Apple, I knew that his death was imminent.  A man like this doesn’t step down, doesn’t let go of the bouncing baby he had fathered and rescued from the flames, unless he knows it’s the end.  I said, “I wouldn’t be surprised if he dies tomorrow.”

And then for the first time, I realized that he represented something very important.  He was an artist of technology, one of the very few of his kind.  As expensive as his products were, as overbearing as his acolytes were, as publicly dismissive as the man could be toward legitimate criticism of his work and ways, it was clear that he believed in the world he created.  I used to think that he was getting fat off of duping the public into buying things they didn’t need, but I think the truth is more complicated. 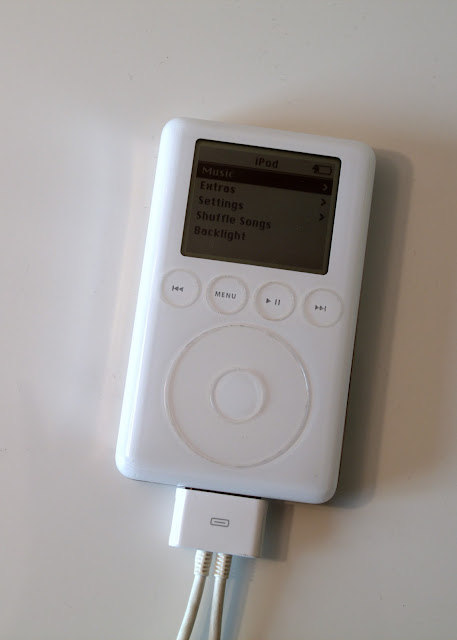 Years ago, my brother won an iPod.  This was a 15-gig device, very early generation.  A Mac-aholic could probably tell you which version it is.  It was the first Apple product that anyone in my family owned.  My brother never really used it, but for a while, I used it every day, listening to all those old college-acquired mp3s at the office.  But I had my reservations.  I cursed the iPod for its frictionless casing, which put me in constant fear of having it slip through my fingers.  I lambasted it for occasionally bugging out and freezing, as if it were a Windows-based system.  I scorned the pretentious white cable that eventually malfunctioned and left me unable to connect the iPod to my computer.  I lingered in my grumblings that a portable music player was nice, but really just a luxury, as all of these overhyped Apple products were.  I didn’t like this little machine, and I didn’t like the iTunes software that served it.  And yet I used it every day, and I never seriously believed that any competing system would operate better.

But after a few years of use, I put the iPod down, and have rarely used it since.  Whether you want to create more or consume more, technology is supposed to make that process easier, faster, better.  The reason I eventually put down the iPod was because I realized it wasn’t making my life better.  I loved music, but having it on all the time while my mind was trying to engage my workday tasks, or driving, or other things that held my attention hostage, I think I started to associate music, even good music, with the parts of my life that I would rather have spent doing something else.  This, along with the overwhelming availability of music, whether through paid or unpaid channels, had desensitized me to the experience of listening.  I was acquiring music, new and old, to “see if it was any good,” but I wasn’t actually listening to it.

I had become the passive, slavish machine.

That’s one of the central ironies of Steve Jobs’s creations and of his legacy.  As much as his life sets an example of doggedly pursuing your own excellence, and as genuinely inspirational as his Stanford commencement address was as a message of perseverance and non-conformity, he created things that, though they arguably had a moral aesthetic, were strictly amoral in use.  They could be tools of liberation or subjugation, depending on the strength of will of the user.  Thus, we see that the hammer-throwing blond girl and the pasty-faced drones of the iconic Mac Super Bowl commercial are siblings, bouncing babies born of society’s equal capacity for self-exaltation and self-annihilation.

About a year or two ago, I was inexplicably jonesing to play Bouncing Babies, although I misremembered the title as “Babies On Fire”, which, when I plugged it into Google, did not bring up what I wanted.

Eventually, I managed to find and download the game, but then I couldn't even run the damn DOS program on my Vista laptop! I briefly considered getting a DOS emulator for Vista, but then I realized that it was just too far, too crazy—resorting to such bootleg tricks because my modern computer wouldn't do DOS.

Henry has died of typhoid.