Evil has no name 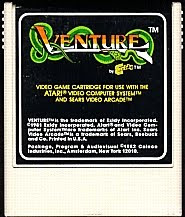 In later years, we saw Phanto successors like the evil Samus clone who would chase you around Metroid Fusion, and a freak called Nemesis who would hunt you in Resident Evil 3. There was also the ghostly and impatient Baron von Blubba in Bubble Bobble, which pre-dated Mario 2. These and even Phanto are Johnny-come-lately sissy scares compared to the scariest creature in the history of gaming . . . and life.

Some call him the “hall monster”; others call him the “green monster.” Hell, some people probably call him “Maurice,” for all I know. I have my own name for him: “evil green face.” But learn from my example: naming him gives you no mastery over him . . . or over your fear.

The game was called Venture, produced by Exidy and released on the Atari 2600 (among other systems) back when game controllers looked like calculators. Long before Nintendo “created” Doki Doki Panic/Super Mario Bros. 2 and its resident tormentor, Phanto.

Now, by putting quotes around “created,” I’m not saying Nintendo stole this Phanto idea from a crappy Atari game. Allow me to postulate a fictional true story that maybe one day, they were making Doki Doki Panic, and someone, say, Shigeru Miyamoto, says, “You know, when I was a kid, I played a game called Venture, where you grabbed some treasure, and then this evil face would chase you down until you died. And I’m going to steal that face for this game. And I don’t even care if people know I stole it. I yam what I yam.”

And then the imperialist Hiroshi Yamauchi likely said, “Yeah, do it! Steal from those patak!”

And then the enfant terrible, Gunpei Yokoi, who would later be secretly murdered by a Nintendo hit squad for his role in creating the monumental failure, the Virtual Boy console, his death faked as a car accident, probably said, “Haha, man I like to steal things like this from other games and not give credit to the yo-yos who created it.” And then one day, he was dead.

Venture had a main screen with four rooms you could enter. In the main screen, your character was a pixel. For those of you who were born during the Taft administration, a pixel is a small colored square.

Today, we have these silly newfangled words for it like “pixel” and “avatar,” but back in the Reagan years, we just called it a “dot.”

When you went into one of the four rooms, you turned into a smiley face. Now back when I was a sproutling, we called such things a smiley face, but only recently did I learn that the game makers gave him a name, Winkey (sometimes Sir Winkey), and you were obliged by the instruction booklet and/or box art to believe that Winkey was a big muscle-bound clod who shot monsters with a bow and arrow. I didn’t have the game box that showed this picture, so I was blissfully ignorant and untainted by this evil fruit of knowledge.

There’s a lovely phrase about how sometimes things are better if you don’t know so much. I think it goes, “You’re a beautiful retard.”

Can that “noo-nee-noo-nee” background noise even be called “music”? Good gravy. And if he’s supposed to be packing a bow and arrow, why does it sound like a laser?

Anyhoo, if I were the marketing people at Atari or Coleco or whatever, I wouldn’t tell people that you would be controlling a muscular jungle guy with a bow and arrow. That’s just misleading. I’d tell people, “You is controlling a face with a dongle on it that shoots balls.”

And that’s how Faceball 2000 was born. It’s criminal, really, how you people steal.

So first there’s a room with skeletons, and you have to fight past them to grab some blue boxes. Then a room where you shoot snakes and snag a big grape. Then a room with several copies of the robot from Forbidden Planet who are guarding the Lion King’s head. Finally, a room with moving walls that protect the Cullinan Diamond. I guess that’s where Ocean’s Eleven came from.

After you beat these four rooms, there are four more rooms of masochism . . . and terror . . . to go.

But really, you would never beat more than one or two rooms because after your first encounter with “evil green face,” you will wish you were a blind deaf-mute, with all your senses fallen away.

Yes, “evil green face” was scarier than Phanto. He came first, and he also had something Phanto didn’t: he was accompanied by the most horrifying and sickening staticky noise since the tipped-over television from Poltergeist.

When I was a kid, I had a recurring nightmare about being chased by a cactus man on the street where I lived. It was a Halloween type night, but without the candy, and the cactus man wasn’t wearing a costume. He was the costume. That’s kind of what “evil green face” was like, except real.

Remember that part in Back to the Future where Michael J. Fox has just finished playing “Johnny B. Goode,” and the room full of befuddled 40-year-old high schoolers is staring at him, and he says, “I guess you guys aren't ready for that, yet. But your kids are gonna love it”? I hope nobody at Atari ever looked parents in the eye and said that about Venture.

What in the name of Peter Mayhew is going on here?:

It’s like a documentary, a video game review, and an experiential psychological experiment all rolled into one unholy enchilada. I like the intermission where he goes to set up his Atari 2600. Notice that after he starts playing the game, the video turns into The Blair Witch Project.

My God, that is so sad. That numbnuts never had a chance. He didn’t even know he was dead!

Venture, why do you make children cry?
Posted by Czardoz at 2:03 AM

Out of all the titles in our Atari 2600 collection, Venture was the one that I was always too scared to ever try. Many a time would I be digging through that pile of cartridges in boredom, as if one day there might magically be something new to amuse me. Every time I got to that deathly white cart, a chill would run down my spine, and I would hurriedly rebury it and tell myself that that hadn't just happened.

Dangerous snake-covered logo aside, I think my own fear was based entirely on your insistence that it was the scariest game of all time, and from your deadly serious tone, I knew you weren't kidding. I don't think I ever did muster up the courage to try it myself, but I was perhaps as intrigued as I was afraid. I remember asking to see you play it, and you were strongly disinclined to indulge my request. It was as if that Atari 2600 game was the one thing in life that you truly feared.

That video is pretty amazing, but it's a shame the kid didn't stick with it long enough to see how bad it could really get. Did you also see that the next video he uploaded after that was to promote his eBaying of that same Venture stack?

So let me get this straight, you could get a copy of Trigger Man, a VHS of North By Northwest, and 6 copies of Venture for the Atari 2600, all from the same kid?

This may be the only time in the universe that we'll ever see North By Northwest and Venture mentioned in the same breath. Astonishing.

I like the combination of North By Northwest and Venture. But I'm more of a Rope and Pitfall sort of girl myself, considering how well they go together. Swingin'!

My greatest game-induced fear was always typhoid. Wiped out my entire Oregon Trail family. I still fear it. And dysentery.