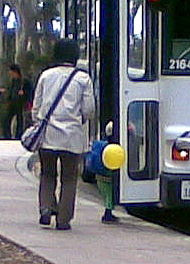 Though the above photograph is about as blurry and confused as a Psyduck, the viewer should be able to discern the unmistakable image of a tiny boy dressed in what could only be interpreted as an Ash Ketchum costume, with a canary yellow balloon trailing behind him as a fanciful representation of Pikachu. Look carefully. See the red and white hat peeking out from behind the bus door. See the blue backpack and blue shoes, the overall air of shrimpy insolence. Revolting, isn’t it? This may not be a perfectly accoutered Ash (see below), but the imagination involved makes it stand out from mere verisimilitude. 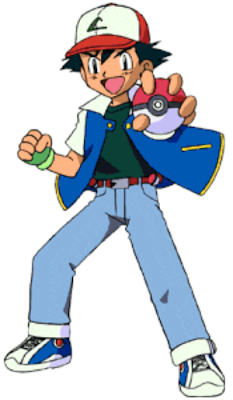 I stalked this mother and child parade for about the length of a street block, trying to capture the money shot while eluding their notice. Astonishingly, the sight of a grown man bounding after a little runt and snapping pictures has the tendency to cause ignorant passersby to mistake said man for a child snatcher. My aversion to being featured on yet another episode of To Catch a Predator forced me to take a timidly defensive posture, like, I don’t know, a Metapod? (He only knows how to “harden,” hahahaha! Disgusting.) Shackled as I was by our suspicious American culture, this photo, shot with my ancient Nokia cell phone’s 2-megapixel camera from a great distance, obscured and fuzzy as it is, was the best and only one I could get.

As the old adage goes, the best camera is the one you have with you. I would have liked to have been wielding my Pentax DSLR with a super-telephoto lens attached at the moment that I stumbled on the lad. But, like a Pokémon trainer who comes upon a rare Pokémon but has no master ball . . . uh . . . and then he has to use his other ball . . . um . . . and his type is weak against some other type . . . er . . . I’m not good with these Poké-nalogies.

What other franchise could I try . . .

Like Elliot Salem and Tyson Rios bro-ing it up in Army of Two, you use the tools you have. If you don’t have a guitar to celebrate surviving a hairy back-to-front tandem parachuting gauntlet, you muscle out some air guitar and make funny noises with your mouth. Don’t have a girl to hug after dishing out a nasty decap? Just walk up slowly behind your partner, grip him tenderly but snugly around the waist (back to front, natch), and lift him gently off the ground until you can feel his manly weight upon you. Then lower him like a child cradled in your loins, his warmth commingling with yours. And hush, no words now, lest you disturb the sanctity of this moment.

Ugh, did you really have to emphasize "back-to-front" twice? Well, I guess there was no other way to do the tandem parachuting . . . .

One day, I'll write a post called "Back-to-Front." I have no idea what it will be about, though.