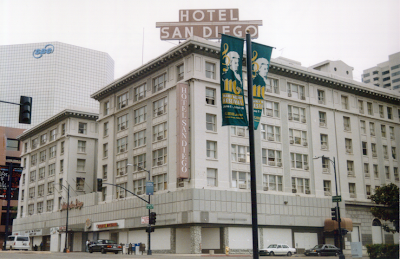 On April 15, 2006, the Hotel San Diego was demolished to make way for an empty hole. The official story is that the feds wanted the downtown site at 339 W. Broadway for an expansion of some courthouse. Thanks to typical gubment alacrity, the site remains a dirt lot almost five years after the wrecking crew turned one of downtown’s few distinctive buildings into a heap of rubble. (To be fair, I recently noted some stirrings on the site, so construction may be visible soon.)
Though it wasn’t a bad looking piece of architecture, I had no special affection for the Hotel San Diego, and I wasn’t in the audience the morning it collapsed upon its own ghosts. In the ensuing years, whenever I drove past the site, I would casually notice the vacant space where the hotel once stood, and wonder at the wisdom of destroying a city’s heritage only to make way for a bigger jail. San Diego doesn’t have nearly the quantity of grand old buildings of a city like Detroit, nor does it have the same level of urban blight. You would think a city like San Diego would have the luxury of taking more care with its historical buildings.
Fast forward to 2010. A few months ago, I was driving through Liberty Station in Point Loma. In 2006, this was home to the nicely cleaned-up remnants of the Naval Training Center. Acres of old buildings stood empty, and what once housed navy personnel was being prepared for a second life as home to freshly painted offices, art studios, galleries, and retail stores. Today, Liberty Station is starting to fulfill its original promise as a tidy village of pedestrian traffic, bland commercialism, and artistic endeavor.
So imagine my surprise as I drove up a random street within the complex and slowed to examine a hulking mass of metal on the side of the road, sitting on a lawn, shaded by trees. Upside-down and laid low as it was, I recognized the name and shape as soon as I saw the front - it was the original sign from atop the Hotel San Diego: 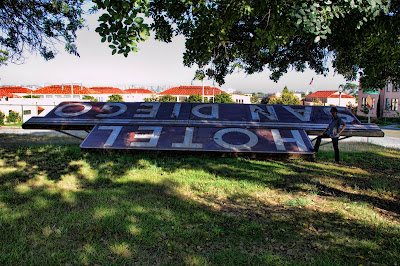 I had thought the sign would be scrap metal somewhere by now, and yet here it was, intact, a little rusty, but functional, a sign without a building. Why was it kept, and why here, out in the open, vulnerable to any vandal with a mind to befoul it? It’s a little ironic that a remnant of a dead era should be casually dumped in a place intended for revitalization and nostalgic restoration.
Just about a week ago, I was at Liberty Station again, and the sign remains on the same patch of grass. If I had more of the journalist in me, I might dig for a story of what’s to become of it. If I do learn of anything, I’ll revisit this in a future post. Until then, I am thankful for this little curiosity on the side of a road, and a few lines of verse it called to mind:

My name is Ozymandias, king of kings.
Look on my works, ye Mighty, and despair!
- Percy Bysshe Shelley

Who do we know with a truck? I'd like to nab this and place it on the roof of the building where you work.

A truck? Try a barge.