And your bird can sing

In a previous life, when shaggy hair and round-framed glasses were more my bag, I received two of the odder, more flattering comments I’ve ever received.

The first was from a girl I met through ballroom dance. One day, without prelude, she told me I reminded her of someone, but she couldn’t remember whom. “Someone famous and very good-looking?” I fished. I got it half right. After dance class, she finally conjured the name: “John Lennon.” She suggested that it went beyond the glasses and hair; there was something in my demeanor.

The second comment came after I had parked on the street one night, on my way to the Casbah for a show (undoubtedly, it was a sub-Beatles-caliber band). Just as I stepped out of my car, a (presumably homeless) man approached me, crying, “Hey, hey! You got a cigarette?” I was mildly alarmed, but right when I turned to face this figure emerging from the shadows, it was he who was taken aback. “Whoa! You look just like . . . that guy!” I shook my head, “Who’s that?” “The Beatles guy!” he said. “John Lennon?” (There’s not much chance of people mistaking me for Paul.) The guy seemed very pleased, but unfortunately, I couldn’t pay him back for his compliment, seeing that I tend not to pack death sticks.

This coming just a few weeks after the comment from my dance friend, I wondered if I had subconsciously been cultivating Lennon’s look. I certainly had him on the brain, having recently seen a TV documentary about his death and life. This was also around the time when the Working Class Hero two-disc compilation of Lennon’s best was released – my first serious exposure to Lennon’s post-Beatles work.

Hearing the music 30 years after it was made, I marveled at how humane it sounded, especially compared to most of the mindless aggression that clogs the airwaves today. In his songs, I heard a man obsessed with personal freedom and in love with love itself; fitting, since between love and freedom, when one is absent, the other soon withers.

Some time after my two interesting encounters, I had a chance to travel to New York, and I visited Strawberry Fields, a small garden on the western edge of Central Park, just across the street from the Dakota Apartments, where Lennon lived and died. Strawberry Fields commemorates his life and dreams, and on the day I visited, the Imagine mosaic at its center was particularly inviting: 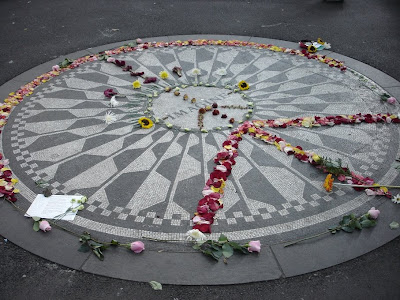 Without any premeditation on my part, I think I just naturally gravitated to John more than the other Beatles. I’m not saying his songs were the best in the band (not all of them anyway), but only that I empathize most with the way he seemed to be. I think of how much we miss him now, not just his music, but the hopeful vision it fostered, and I hope that my similarities to him go beyond looks.

* * *
As much as I admire John’s solo work, he’ll always be a Beatle first in my mind. Today, September 9, 2009, is the big release day: all of their original studio albums REMASTERED(!) in two sets: 1) a stereo box set, and 2) a mono box set containing those albums that were originally mixed in mono sound. (Oh, and a little thing called The Beatles: Rock Band also comes out today.) It’s fitting that a band that took 22 years to remaster their music should issue it exclusively on a dying technology – the compact disc. (To be fair, the original 1987 CDs were “remastered”; it’s just that the 1980s tech sounded older and worse with every passing year.)

I bought the stereo box today. It may be the first time I’ve ever purchased a CD on the release date. It’ll also be the last; these are the last CDs I’ll ever buy. Well, until I can get my hands on the mono box. 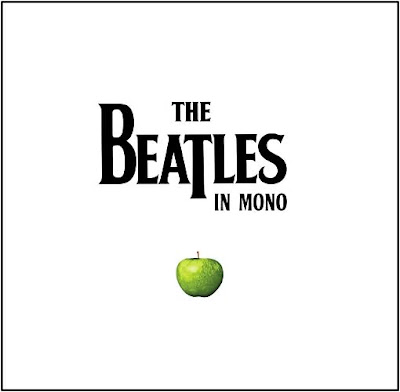 I like how you considered your earlier style to be "in a previous life." I knew you in that life. From behind your round glasses, you took a photo of me at the fair, lying down in a patch of straw with a cow. I have a feeling that it was more than just our hairstyles that differentiated the current life from the previous one.

My dad once told me that he ditched school on the day that Sgt. Pepper was released. He bought it at the record store and returned home, listening to it over and over. It made me realize that one of the reasons why my dad and I are so connected is our shared love of music.

I think it would be really fun to hang out and listen to album after album of the set, talking about the music while drinking and eating. I'm excited to geek out over something I so enjoy. Dad tried to buy the set yesterday afternoon, but they were already sold out.