Touched for the very last time

As I walked down Michigan Avenue on a recent trip to Chicago, I saw a familiar building bearing unfamiliar nameplates. The Virgin Megastore at the corner of Michigan and Ohio, long one of my favorite stops along Chicago’s “Magnificent Mile,” is no more, and has been replaced by a Forever 21 (aka, “XXI”), the ubiquitous young women’s fashion store that specializes in designer knockoffs at Walmart prices.

Here is how the building looked during my college years: 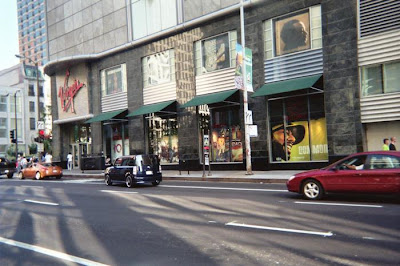 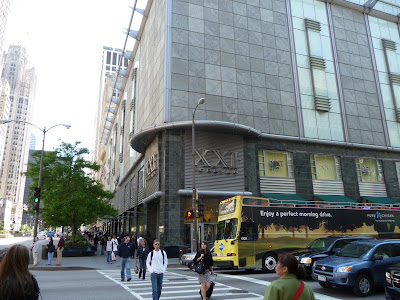 Along with the old Tower Records store on S. Wabash (and to a lesser extent the still extant Borders on N. Michigan), Virgin was one of Chicago’s premier places to browse for music, especially classical music, which evolved to become practically the only music I listened to in college.

I can trace my love of classical music to two sources: 1) my father’s enjoyment and regular playing of it at home while I was growing up, and 2) my time at the University of Chicago, where my friends introduced me to their favorite music, got me hooked, and led me to my own discoveries. Very quickly, borrowing CDs from friends just wasn’t enough. I had acquired the thirst, and a bite here and a nibble there would no longer satisfy. So I went shopping.

Tower had an immense selection, but Virgin was arguably as good, and it had Tower beat in terms of presentation. Tower was housed in a gritty building under the El tracks. The classical section was on the top floor, and though there was an escalator up, there was none going down, so when I was done poring over Beethoven box sets and woefully pulling my pocket linings out of my pants, I had to walk down along a steep and winding side staircase that emptied into a filthy corridor adorned only with a stack of Chicago Readers and the smell of fresh urine.

Virgin, on the other hand, was an immaculate prestige store right on the Mag Mile. In contrast to the raucous downstairs selection of rock, pop, and hip-hop, with music blaring from above and played by a live DJ, the classical section upstairs featured quiet contemplation among the glimmering rows of CDs, as well as an entire wall of opera recordings. This was the real McCoy, unlike the token classical sections of off-brand “100 Greatest Hits of Mozart” CDs found at your local Best Buy or the late, unlamented Circuit City.

Both Tower and Virgin had all the labels: Decca (formerly London in the U.S.), Philips (now joined with Decca), Deutsche Grammophon, Sony, EMI, Teldec, Naxos – all your favorites, each with their more or less exclusive stable of legendary performers.

My favorites were the box sets. These were a cost-effective way for a college student to amass a library of classical music, and they were the fundamental building blocks of my collection. I had little patience for browsing new releases by the latest diva of the month or the “next great violinist,” sold at a premium price. I preferred the classic recordings, superlative performances that had endured over the decades, and every label had its archive series, boxed and priced to move. DG’s 9-disc complete set of Dvorak string quartets played by the Prague String Quartet set you back about $70, a hefty sum, but also a relative bargain when you consider that it’s just $8 a disc. Decca’s 13-disc set of the complete Chopin solo piano music played by Vladimir Ashkenazy cost about $95, a veritable mint, but still, that’s about $7 a disc. The bargain sets brought great, sophisticated music into the hands of a college student who was only just learning how to pretend to the high life.

Sure, it could be argued that no one pianist’s interpretation of Chopin, no matter how fine, could really tell the whole story of the composer’s work. That’s true enough, and I’d love to buy multiple recordings of my favorite works and compare the nuances that each performer brings to the music. I’d also love to be massaged by Russian princesses while eating foie gras seared by my manservant, Witherby. . . .

Eventually, we’ll have clueless generations who won’t remember a time when people actually bought music on shiny discs in a store, rather than online from a degenerate corporation clad in whiteface. That is, if people buy music at all. Hell, even I can barely believe that I once took for granted that you had to pay money for music. How stupid was I? (For the record, it was during my college years that the mp3 downloading revolution and its attendant piracy were born, but that’s a story for another time.)

As a commercial venture, the Virgin Megastore chain was a much bigger success for Richard Branson than, say, The Rebel Billionaire. With the way the world is going now, I don’t know if either Branson or anyone else could, or would even want to, replace it. Borders and Barnes and Noble are okay. Amazon has the volume, but the interface is so 1997 (and not in the good way). And classical music is comparatively difficult to find in the downloadable world (though this will certainly be the answer one day). For all our technological advances, one thing seems obvious to me: Browsing through thousands of CDs in a store is fun. Browsing through thousands of links and web pages on your laptop is . . . mind-numbing.

* * *
As a side note, I wish there were a men’s version of Forever 21, a store that carried highly fashionable and “of the moment” menswear that could be bought with the change stuck beneath your sofa cushions (if you could afford a sofa, which I can’t). There is H&M, the super-popular Swedish chain that slowly crawled across America and has only in the past two years penetrated the West Coast. H&M carries a full men’s selection, but overall, they are more like the sartorial analogue to Ikea than a place for imitation couture. They specialize in a Euro-minimalist aesthetic, rather than the more diverse dabbling in trendy styles that characterizes Forever 21.

Indeed, the bigger Forever 21 stores now have a men’s section, usually occupying a disgraced corner of the store, like the unruly kid forced to don a dunce cap. And while the prices and material are in line with the ladies’ selections, the “designers” at XXI apparently believe that men like to wear only gray, black, and white, and have an inordinate fondness for shapeless hoodies over skintight jeans. The lady’s side showcases pop tarts, faux vintage princesses, and cute tomboys; the men’s side perpetuates slob chic. Why the disconnect?

Though I know many women would disagree with me, it is entirely obvious to me that cheap, good men’s clothing is much harder to find than cheap, good women’s clothing. At Forever 21, girls can buy a t-shirt for $5. They can buy a skirt for $10 and a dress for $20. I’ve seen $16 jeans there, and they weren’t on sale. The only place I could find prices like that for men’s clothing is Old Navy, and I swear their stuff is made from crumpled newsprint.

Until some visionary fashionisto brings us a Forever Dudes Be Stylin’, you can find me in the clearance racks at the Banana Republic Factory Store. Yeah, the shirts say “Banana Republic” on them and are emblazoned with your typical fake golf tournaments and bogus yacht races, but come on – they’re $3! Even Witherby has to eat.

Now about those Russian princesses . . .
Posted by Czardoz at 2:51 AM

The only problem with Forev's stuff is that it falls apart quickly. I guess this is no problem if you keep up with the trends and don't intend to wear certain pieces for several seasons. I for one am still wearing a pair of cashmere culottes from Bullock's {retro reference #2347283423647423.}