I Almost Ate It

“Ate what?” you ask me. The farm, obviously; cows, chickens, tractors, the whole kit ‘n’ caboodle. I almost bought the farm, took a dirt nap, bit the dust – however you want to say it in agrarian terms.

I was driving home one recent night, sitting at a major intersection, waiting for green. Green came, and I proceeded to start turning left. I was vaguely aware of the car to my right going straight. I soon became very aware of him. I was in the middle of the intersection, halfway through my lefty, when I heard a screech, then saw my neighbor to the right ram into a medium-sized white van, which had come ripping through the intersection perpendicular to us. My neighbor plowed into the van’s hindquarters, hoisting up the van’s left side briefly, and sending it into a tailspin, till it finally came to a halt facing opposite the direction it came. The chaotic impact happened maybe 20 feet to my right, with the van’s epic spinout streaking just in front of my car, and landing with a squeak about 20 feet in front of me. Refer to the following diagram: 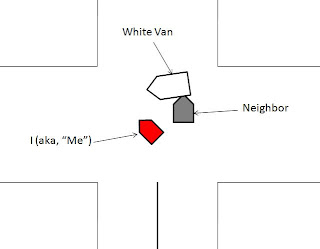 It all happened in half a second. I froze, hitting my brakes immediately, then glanced in my rear view to see if the car behind me might hit me due to the sudden stop. Thankfully, his brakes and awareness worked as well as mine. Suddenly, horns went off like fireworks. I thought I heard honking all around me, and I wondered why people were unleashing the beast. To warn others nearby to watch out? To chastise the red-runner and offer solidarity to the poor schlimazel who was just obeying his green? To summon forth the primeval baboon that lay deep within their human hearts? In hindsight, I think perhaps the struck vehicles, one or both, ended up with their horns stuck in active position, and it was only my frazzled nerves that amplified the sound into a cacophony.

I sat in the middle of the intersection, mouth agape, for about five seconds, before realizing that I probably shouldn’t be hanging out there. One of the van’s wheels had flown loose and skipped off to the side, but the path was mostly clear. I could complete my left turn and hightail it out of there if I wished. And I wished.

I realized that had I driven just a bit faster through that intersection, that van would have been on top of me. If I had been distracted, been careless or upset about some unrelated matter, and tried to take it out on the indifferent road, I might have ended up on the blunt end of a runaway van, and the road would have remained indifferent.

About two minutes and several blocks later, I heard a fire engine wail its way toward the scene of the accident. I actually drove back to the scene about ten minutes later, thinking maybe I should tell the police on site that I had witnessed, nay, nearly been swallowed up in, the mess. But when I got there, I saw that no one seemed to be seriously injured, the police were walking about, talking to, presumably, the drivers/passengers of the wrecked cars. I saw the carcasses of the two vehicles lying in state. And it was pretty clear cut to me. The police didn’t need me to explain what had happened. All you had to do was look at the evidence on site. And I don’t need any more rendezvous with the Man.

I face the government twice a year; once, when I pay taxes, and one more time I offer as an acknowledgement of the inevitability of the Man sticking his nose in my life. Sometimes it’s an ineffectual jury duty notice. Sometimes a reminder to renew my driver’s license. But I won’t go looking for reasons to talk to the Man. Let him come find me if he needs me.
Posted by Czardoz at 3:22 AM

I hear the white van is the most nondescript of all vehicles--the car of choice for running shady ops.

And you must have been really frazzled if you were actually considering offering yourself to The Man.