Booth and the Double Button

My former teacher at the University of Chicago, Wayne Booth, wrote an essay entitled, “Is There Any Knowledge that a Man Must Have?” In it, he discussed the aims of liberal education, and while I suspect he didn’t have in mind such a mundane task as sewing a button, Mr. Booth possessed a breadth of interests that surprised most.
On a recent winter trip to Seattle, in the midst of uncommonly cold weather (as confirmed/alleged by various longtime locals I happened to come across), I recalled Mr. Booth’s question when the buttons of my overcoat (the only coat I had brought for this weeks-long trip) started popping off. 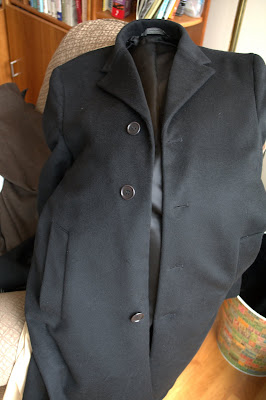 The coat was barely adequate to fend off the chill in the first place, and it would certainly be useless to me if it couldn’t close. At the same time, I had never in my life sewn a button. I think my only sewing experience of any kind was a crafts project in elementary school. I didn’t plan to spend the rest of my trip indoors or furiously hugging myself to keep my coat closed. (Nor did my budget or temperament allow for the purchase of a new garment.) So I had a choice: take the coat to someone to fix the buttons, or sew them myself.
How hard could it be? I thought. So I bought a rudimentary sewing kit at Walgreen’s and, with the internet as my guide, I got to work. Here are the malefactors (shown with size references): 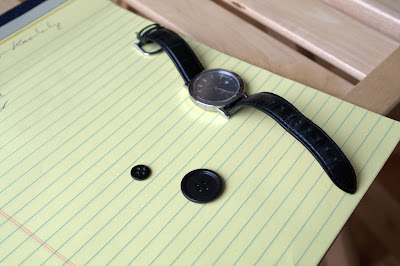 You can see that there is not only the main, larger button for the front of the coat, but also a smaller (let’s call it an anchor) button that attaches to the interior side. I didn’t fancy the idea of cutting my teeth on this pernicious “double button,” but I figured that one doesn’t choose the crisis, only the response.
Once I got going, I realized that it was indeed a simple operation, though none of the videos and guides I initially consulted made clear how to accomplish the final knot that the button required. So I improvised a little, and though my technique wasn’t entirely orthodox, the button held well enough. I tackled a second button with more assurance, but left too narrow a shank this time, meaning that the gap between button and fabric was barely wide enough to accommodate easy buttoning. But it worked. And voila! The coat, she is done: 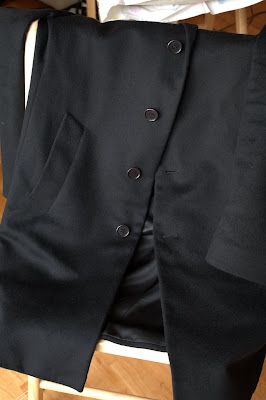 I returned to the question: is there any knowledge that a man must have? (Or as Mr. Booth revised at a later, more politically correct time: what knowledge, if any, should everybody pursue?) Specifically, is sewing a button a skill that everyone should learn? Once I had done it, I had to say no, I didn’t need to have this particular knowledge, and if I had a personal handmaiden to sew my buttons and darn my socks till the end of days, I wouldn’t feel like I had lost some crucial piece of my humanity.
But the question is not about specific fragments of knowledge. Rather, it asks of each of us what it is that we need to know in order to be truly free as human beings. I wouldn’t say that learning to sew a button was an Olympian achievement, but I did enjoy the small freedom I felt in doing it myself, and knowing that when the time comes, I could do it again.
As soon as I join the ranks of professional seamstresses (we really need a masculine form of that word), I will announce the pricing for my services.
* * *
Wayne Booth was a great man, a great humanist. I was proud to know him, and only regret that I never got to know him well. Though the academy has a reputation for snootiness, I never knew a professor so at ease with bringing together the prosaic and the divine. I trust he would not begrudge me the use of his good name and good words in pursuit of matters sartorial.

“A man can be ignorant even of Shakespeare, Aristotle, Beethoven, and Einstein, and be a man for a’ that – if he has learned how to think his own thoughts, experience beauty for himself, and choose his own actions.” – Wayne Booth

Well, I should think the obvious masculine would be "seamstressman."

Yeah, yeah, I know what you're thinking. Men do those jobs and just use the regular title. Yeah, sure they do.