I belong to myself

He was the grand salami of the Grand Slam, the lothario of Love-40, the debauchee of the double fault. Leave it to others to reflect on Marat Safin’s career. I just liked the man’s farewell. 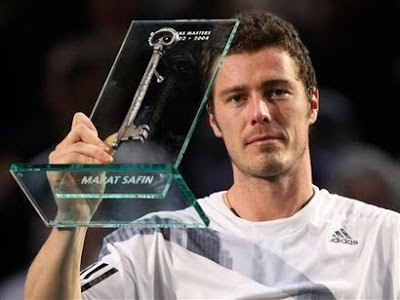 After his final match, a loss at the Paris Masters tournament on November 11, 2009, he left his adoring crowd with these words:

“Today I will put all my memories, all my wins and losses in a small box. Today a door is closed, hopefully another one will open.”

A bit more poetry than you’ll ever get out of Federer or Nadal. Sure, they have the Slams and the insatiable drive to be the best that eluded Safin, but it seems like that kind of life and career just wasn’t meant for him. In his words:

“It’s a tough sport. It’s very cruel. What I’ll miss least is the injuries and the pressure. The pressure is what you are going through all these years. Because you are defending your points. You need to achieve, you need to improve, you need to count the points to see if you are going to make the Masters, if you’re going to be seeded at a Grand Slam or not. So you’re completely stressed 24/7. That is what I hate about it. It’s just too much. No rest for the brain at all.”

“Now I have no schedule, no practices, no nothing. I belong to myself.”

* * *
On a much smaller and less visible scale, I can relate to Safin’s sentiments. I spent almost two years competing as an amateur ballroom dancer, just a pond compared to the ocean of a professional sport, but to me, it was worth any ten sports combined and blended into an unholy smoothie of athleticism.
“Competing,” as any athlete knows, is just a tiny part of the commitment. There are the hours and weeks of practice and coaching and lessons, the body aches and alarm clocks clanging far too early, the hustling through rush hour to get to practice on time, and the hustling out to salvage what remained of a normal life – all meant to make you look brilliant for the five to ten minutes you actually spend competing at the competition. And after that comes the self-examination, the questions about how to get better, the questions about what questions to ask, and too often the halfcocked experiments and harebrained schemes to improve one figure or another. No rest.
I was lucky. I had a dance partner who made practice seem like play, who trusted me to make the right decisions on and off the dance floor, and who believed that everything we were doing was worth it. I can’t imagine Safin had anywhere near the same kind of support.
It’s been six months since I’ve danced seriously, and every day that goes by, I can feel it slipping away, the skill, the fluidity, the determination to become better. I know I could slip back into it just as easily as slip away. Unlike Safin, I haven’t run out of gas yet. But at the same time, I haven’t found the peace he’s found. I hope one day to be able to say the words he says so well: “I belong to myself.”
* * *
This is my 50th blog post, and for a while, as I considered how to commemorate the occasion, I was straddling the line between reverence and irreverence, and realizing that it can be difficult to have it both ways. I chose to lean on the former. Tune in soon for the other contender for the Big 50.
Posted by Czardoz at 1:25 AM