"We are sold out of the Double Down"

No, they didn’t really say that to me when I went to the nearest KFC to finally get my paws on the biggest thing to hit fast food since the McDLT. But they may as well have, considering the gluttonous demand for the thing that was evident at this particular outpost (which almost certainly reflects an equally ravenous demand nationwide). 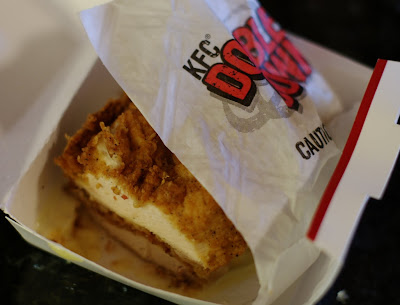 The first thing I noticed when I entered the establishment (other than the utter lack of counter service for walk-in customers) was a girl behind the counter informing a guy in the drive-thru lane that they were out of the fried chicken fillets, and whether he would be “all right” with the grilled Double Down. Noting the man’s lofty carriage, I found it hard to believe he would be “all right” with the grilled. Maybe “kinda okay,” but certainly not “all right.” He reluctantly acquiesced.

This clearly wasn’t that guy’s first Double Down, or else, like me, he surely would have stood his ground and waited for the fried one. I was told that I’d have to “wait a few minutes” for them to fry up some new fillets. They even gave me a free soda to apologize for the wait. Well-played, Colonel.

During this intermission, I should note that the Double Down “sandwich” (if it can be called such a thing) costs $4.99 a la carte, which puts it squarely in the realm of “premium” fast food items, alongside McDonald’s Angus Third Pounders (which are disgusting) and the Carl’s Jr. Six Dollar Burgers (also gross). The economy being what it is, I ordered merely two Double Downs, and resigned myself to having to ration the portions out among myself and my friends and family.

Unlike some critics, I was actually rather looking forward to the Double Down’s release, partly because of culinary curiosity, and partly for its symbolic slap-in-the-face to organic food Nazis and sanctimonious Fast Food Nation-reading drones who have of late terrorized the hungry populace. (FYI: I am currently reading Fast Food Nation. Best thing about it: the relatively thorough discussion of the history of the fast food industry and how it is related to other trends in mid-century America. Worst thing: the author’s arrogant expectation of your moral outrage.)

Back to the chicken: I watch as a girl tongs a few chicken fillets onto some paper wrappers, squeezes some sauce onto them out of a plastic bottle, and tops them with two slices of cheese and a strip of bacon torn in half with her bare fingers. And so, after about 20 minutes in this “fast food” joint, the Double Down is mine. How does it taste? Delicious. How could it not be delicious? It’s two KFC chicken fillets hugging bacon, cheese, and a creamy sauce that (like the rest of this hunk of gustatory delight) has been chemically engineered to be pleasing to normal human taste buds.

Is this the end of human civilization? Hardly. The Double Down is no worse than a double cheeseburger with bacon and mayo, and most people consider that perfectly sane. Or think of it this way: the last time your mom, er, ahem, your significant other, brought home a bucket of KFC, how many pieces of chicken did you eat? Two? I rest my case. Yes, there’s bacon, as well, but as any anthropologist will tell you, bacon has long been an essential food in every human civilization. It’s a common denominator, like wine or potatoes. As it says in Deuteronomy, “Therefore eateth ye of the fat of the swine, and your generations shall be fruitful upon the earth.” And let me quote Leviticus: “Verily, a man shall cleave unto his poultry, and his hoggish brood shall comfort him all the days of his life. I am the Lord thy God.”

KFC Double Down – the chosen sandwich.
Posted by Czardoz at 6:36 PM

Email ThisBlogThis!Share to TwitterShare to FacebookShare to Pinterest
Labels: food and drink

After more serious consideration, it did indeed occur to me that the Double Down was not much different from having two pieces of Kentucky Fried Chicken out of a bucket. But, following that same logic through its natural course, if you were to offer me bacon and cheese as toppings on my KFC, I can honestly say that I would not be interested. What do they offer, after all, except to make it saltier, soggier, and sloppier? They seem to be included as fillings in the Double Down only to give the impression of it as a sandwich and of fried chicken as a substitute for bread, which is exactly what makes the idea disgusting at first glance. In reality, the boneless chicken fillets alone make the item a delicious alternative to legs and thighs, yet it apparently would not do to just sell a fillet sans sandwich. It's crazy, but the Double Down is less its substance than its form, which should be the repulsive part. But I suppose the demand you witnessed is proof of the marketing savvy behind it.

Yes, it is tasty. No, I'm not going to eat another. Especially taking price into consideration, I'll happily take a Snacker instead.

Your point is well taken, that it's this "chicken as bread" appearance/form that is "disgusting." And I, too, was somewhat repulsed when images of this behemoth first scandalized the prim and proper pages of the Interwebs. But then it hit me: judging something by its appearance rather than its substance - that goes exactly against the founding principles of our great nation. And even if our national myths are compromised by reality, let's say that this kind of attitude runs counter to common decency and fairness. Let's judge the Double Down not by its unfortunate construction, but on the unimpeachable content of its character.

If you've ever seen a Steve Martin movie called The Jerk (and I know you have), you may remember something called Pizza in a Cup. The character is a joke, and so are all his inventions, and yet I never considered Pizza in a Cup to be ridiculous. In fact, I thought it was a brilliant idea and would have loved to have been able to get that in real life, even though the appearance is contrary to what most people seem to expect and want from pizza.

Having said that, I'd like to offer one more anecdote. After taking home one of the Double Downs, I decided I would slap it on a hamburger bun and throw a few slices of tomato on it as well (for health reasons). To no one's surprise, each of the two chicken fillets was more than a match for an entire sesame seed bun (top and bottom), meaning that the Double Down is the filling to two pretty large chicken sandwiches.

Did it taste better as a traditional chicken sandwich? Well, it wasn't as juicy, but it was certainly more balanced and less sloppy. Overall, it simply tasted more "acceptable," not really any better. So is that my my head talking or my taste buds? I guess every man will have to square that with his own conscience.

I'm not saying that the Double Down is disgusting. I'm saying that it was conceived, not in the kitchen, but in the marketing department. And that's crazy to me because your and my initial responses should have suggested that the thing would be unmarketable.

But it has become apparent that nobody is really repulsed by this. We all just lie to ourselves and call it self-control, but we've never been able to fool KFC. So I don't want to hear any defense of the Double Down's "unfortunate construction," because I don't doubt for one second that Colonel Sanders has the upper hand. Even in death, he remains six steps ahead of us all.

Put more concisely, I believe KFC is counting on you to judge the Double Down by its appearance. Otherwise, they would just sell chicken fillets (which they don't, according to the website), because that's all it is in practice (bacon and cheese do not make a sandwich, in my humble opinion).

Reminds me a little of the Good Morning Burger from The Simpsons:

"We take eighteen ounces of sizzling ground beef, and then soak it in rich creamery butter. Then we top it off with bacon, ham and a fried egg. We call it the Good Morning Burger."

You can throw in some rooster, a horse, maybe a lion, and call it a "Good Morning Good Morning" Burger.